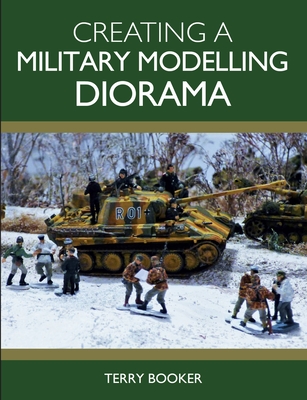 
Not On Our Shelves—Ships in 1-5 Days
Creating a diorama offers modellers a chance to display their figures and vehicles in a realistic setting, often providing a ‘snapshot’ of a moment in history. Creating a Military Modelling Diorama provides step-by-step instructions on
how to plan, design and build a diorama and is suitable for new and more experienced modellers.

With more than 270 colour photographs, this new book from Terry Booker considers all scales from 1/87 (H0) to 1/32 and their implications for the diorama builder. The importance of research to ensure historical accuracy is emphasized. Advice is given on the creation of dioramas in different scales and sizes. The book demonstrates the techniques required to achieve effective results for landscapes, terrain and
vegetation.

Terry Booker was born at the outbreak of the Second World War and grew up in a small village at the foot of the Berkshire Downs close to the main line from Paddington to the West Country. He was lucky enough to witness the last months of the old GWR, the early 'Golden Years' of British Railways and the last steam-hauled freight trains in West Germany. Terry has had a lifelong interest in railway modelling and enjoys exhibiting his work. His highly acclaimed loft-layout, Wessex Lines, has featured on video, DVD and on the pages of Railway Modeller and Model Rail.