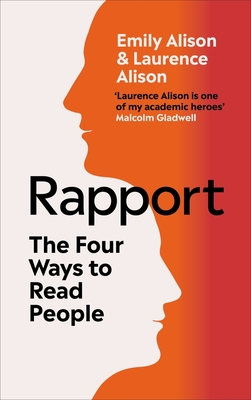 
Backordered
All of us have to deal with difficult people. Whether we’re asking our neighbor to move a fence or our boss for a pay rise, we can struggle to avoid arguments and get what we want. Laurence and Emily Alison are world leaders in forensic psychology, and they specialize in the most difficult interactions imaginable: criminal interrogations. They advise and train the police, security agencies, the FBI, and the CIA on how to deal with extremely dangerous suspects when the stakes are high. After 30 years’ work—and unprecedented access to 2,000 hours of terrorist interrogations—they have developed a ground-breaking model of interpersonal communication. This deceptively simple approach to handling any encounter works as well for teenagers as it does for terrorists. Now it’s time to share it with the world. Rapport reveals that every interaction follows four styles: Control (the lion), Capitulate (the mouse), Confront (the Tyrannosaur) and Co-operate (the monkey). As soon as you understand these styles and your own goals you can shape any conversation at will, and you’ll be closer to the real secret: how to create instant rapport.
Laurence Alison is a professor of psychology at the University of Liverpool, and head of the Centre for Critical Incident Decision Making. He has an international reputation and is widely published in relation to his work on decision-making in high-stake environments, interviewing and interrogation, and prioritization and detection of sex offenders. He has been a psychological advisor on nearly 500 major incidents, including high profile murder cases and London bombings. Emily Alison is a behavioral advisor and clinical supervisor to organizations working with domestic violence; her programs are now used by over 100 organizations.
"Laurence Alison is one of my academic heroes. He does what every writer longs to do. He makes the difficult clear–without losing his rigour."  —Malcolm Gladwell

"They are quietly revolutionizing the study and practice of interrogation…Their findings are changing the way law enforcement and security agencies approach the delicate and vital task of gathering human intelligence." —The Guardian