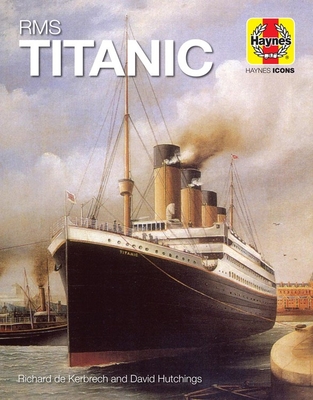 
Backordered
With an authoritative text and hundreds of illustrations, see how the RMS Titanic was built, launched and fitted out. Read about her lavish passenger accommodation. Learn about the captain’s responsibilities, including the operation of a transatlantic liner. Consider the chief engineer’s view – how did he manage the huge engines and other onboard systems? What was it like to operate a luxury ocean liner from the perspective of Titanic’s owner, the White Star Line?

David Hutchings is a former shipwright and historian who has written widely on the great transatlantic ocean liners. He served his shipwright apprenticeship in the Royal Dockyard at Portsmouth. He followed a career as a draughtsman, weights engineer, and technical librarian in the Royal Dockyard, at the Admiralty Experimental Works, Haslar, with Vosper International and Marconi Underwater Systems, and finally with Vosper Thornycroft. He is the author of nine books on maritime history lives at Lee-on-the-Solent.

Richard P. de Kerbrech BSc, Cert Ed, I Eng, served his marine engineering apprenticeship with Shaw, Savill & Albion shipping company. He was an inspector at the Admiralty Marine Engineering Establishment before becoming a lecturer in Mechanical and Production Engineering. He is the author of more than twelve books on maritime history. He lives on the Isle of Wight.