Beyond Bitcoin: Decentralized Finance and the End of Banks (Paperback) 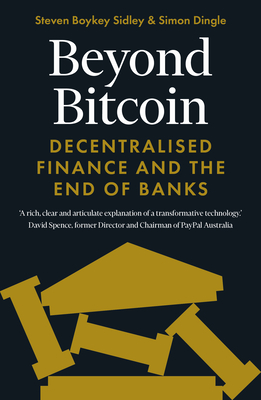 Beyond Bitcoin: Decentralized Finance and the End of Banks (Paperback)

"Everyone who cares about money is trying to get their heads around DeFi, and what it may mean for financial institutions. This book explains it all, with sparkle, depth and clarity." Michael Jordaan, ex-CEO of First National Bank and co-founder of Bank Zero

The first book for a popular audience on the transformative, democratising technology of 'DeFi'

After over a decade of Bitcoin, which has now moved beyond lore and hype into an increasingly robust star in the firmament of global assets, a new and more important question has arisen. What happens beyond Bitcoin? The answer is decentralized finance - 'DeFi'.

Tech and finance experts Steven Boykey Sidley and Simon Dingle argue that DeFi - which enables all manner of financial transactions to take place directly, person to person, without the involvement of financial institutions - will redesign the cogs and wheels in the engines of trust, and make the remarkable rise of Bitcoin look quaint by comparison. It will disrupt and displace fine and respectable companies, if not entire industries.

Sidley and Dingle explain how DeFi works, introduce the organisations and individuals that comprise the new industry, and identify the likely winners and losers in the coming revolution.

STEVEN BOYKEY SIDLEY has worked extensively in technology and finance and is an award-winning novelist, playwright and columnist. An American citizen, he currently lives in Johannesburg with his wife and their two children.SIMON DINGLE is an author, broadcaster and entrepreneur with extensive experience in cryptocurrency, including being on the founding teams of several fintech firms, including cryptocurrency exchange Luno and open banking provider Curve.