The King of Nazi Paris: Henri LaFont and the Gangsters of the French Gestapo (Paperback) 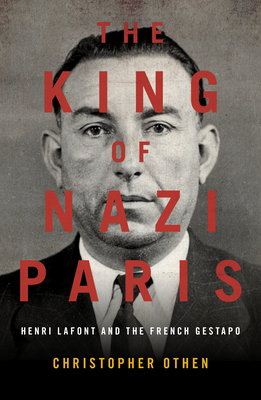 The King of Nazi Paris: Henri LaFont and the Gangsters of the French Gestapo (Paperback)

By the summer of 1943, Henri Lafont had become the most powerful Frenchman in occupied Paris. After spending his early years as a petty criminal scavenging from bins and running from the French police, Lafont was recruited by the Nazis. From this point on his life changed for ever.

Lafont established a motley band of sadistic oddballs that became known as the French Gestapo and included ex-footballers, faded aristocrats, pimps, murderers, burglars and bank robbers. The gang wore the finest clothes, ate at the best restaurants and threw parties for the rich and famous of Nazi Paris out of their headquarters on the exclusive rue Lauriston.

In this fascinating portrait of occupied Paris, Christopher Othen explores how Lafont and his clan of criminal misfits rampaged across the French capital and left a trail of devastation in their wake. He vividly depicts how the gang robbed and murdered their way through the Second World War under the cover of fighting the resistance - until the Allies finally liberated France, and a terrible price had to be paid.

Christopher Othen is a writer and former legal representative to asylum seekers. He is the author of Franco's International Brigades: Adventurers, Fascists, and Christian Crusaders in the Spanish Civil War, Katanga 1960-63: Mercenaries, Spies, and the African Nation that Waged War on the World, Lost Lions of Judah: Haile Selassie's Mongrel Foreign Legion and Soldiers of a Different God: How the Counter-Jihad Created Mayhem, Murder, and the Trump Presidency.