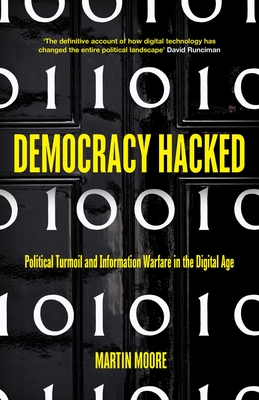 
Special Order—Subject to Availability
In the space of one election cycle, authoritarian governments, moneyed elites and fringe hackers figured out how to game elections, bypass democratic processes, and turn social networks into battlefields. Facebook, Google and Twitter – where our politics now takes place – have lost control and are struggling to claw it back.

Prepare for a new strain of democracy. A world of datafied citizens, real-time surveillance, enforced wellness and pre-crime. Where switching your mobile platform will have more impact on your life than switching your government. Where freedom and privacy are seen as incompatible with social wellbeing and compulsory transparency.

As our lives migrate online, we have become increasingly vulnerable to digital platforms founded on selling your attention to the highest bidder. Our laws don’t cover what is happening and our politicians don’t understand it. But if we don’t change the system now, we may not get another chance.
Martin Moore is director of the Centre for the Study of Media, Communication and Power, and a senior lecturer in the Department of Political Economy at King’s College London. He was previously founding director of the Media Standards Trust (2006–2015) where he won a Knight News Challenge award and a Prospect Think Tank award. He writes extensively on the news media and public policy and lives on a farm in Oxfordshire.
‘Excellent.’
— New Statesman

‘Democracy Hacked gets beyond the headlines – a compelling, informed and highly readable account of how democracy is being disrupted by the tech revolution, and what can be done to get us back on track. One of the best expositions I’ve read yet of what is the biggest political challenge of our generation.’
— Jamie Bartlett, author of The People Vs Tech and The Dark Net

‘Enormously wide-ranging and deeply researched, this is the definitive account of how digital technology has changed the entire political landscape, with profound consequences for democracy. From Brexit to Trump, and from Estonia to the Philippines, Martin Moore uncovers the real stories behind the fake ones. You’ll discover that the truth is often stranger than fiction and that the future is more open than you think.’
— David Runciman, author of How Democracy Ends

‘The world is belatedly waking up to some frightening realities about the intersection of digital technologies and the health of democracies. Martin Moore’s book is a sharp wake-up call – ambitious in its sweep and urgent in its important message.’
— Alan Rusbridger, author of Breaking News

‘Eye-opening… An important, timely, and clearly written look at a crucial subject.’
— Booklist

‘Moore demonstrates how data has affected elections across the world, in the Philippines, Turkey, India, Iran, Britain and beyond... Engrossing, instructive, and urgently necessary.’
— Kirkus