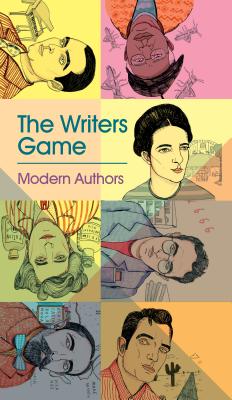 
On Our Shelves Now at:
Who was the most published in their lifetime, Ernest Hemingway or Agatha Christie? Who was the most quotable, F. Scott Fitzgerland or Franz Kafka? Who courted the most scandal, Colette or James Joyce? Pit 32 of the greatest modern writers against each other with these beautifully illustrated cards.
Alex Johnson is a UK-based journalist and writer. His books include Bookshelf, and Improbable Libraries.

Carla Fuentes is a Spanish illustrator based in Valencia. Her many clients include Nike, Esquire, Vogue, and Le Monde.
"With cards featuring 32 of the 20th century's most praised and prominent authors, [ The Writers Game] will pass the time and raise your powers of cocktail party conversation."-Omnivoracious/The Amazon Book Review