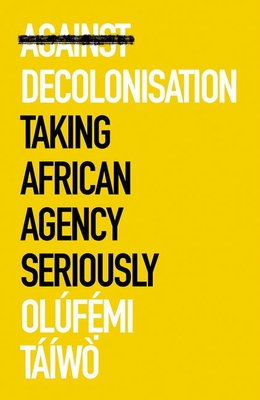 
Not On Our Shelves—Ships in 1-5 Days
Decolonisation has lost its way. Originally a struggle to escape the West's direct political and economic control, it has become a catch-all idea, often for performing morality or authenticity; it suffocates African thought and denies African agency. Ol femi T w fiercely rejects the indiscriminate application of 'decolonisation' to everything from literature, language and philosophy to sociology, psychology and medicine. He argues that the decolonisation industry, obsessed with cataloguing wrongs, is seriously harming scholarship on and in Africa. He finds 'decolonisation' of culture intellectually unsound and wholly unrealistic, conflating modernity with coloniality, and groundlessly advocating an open-ended undoing of global society's foundations. Worst of all, today's movement attacks its own cause: decolorisers themselves are disregarding, infantilizing and imposing values on contemporary African thinkers. This powerful, much-needed intervention questions whether today's 'decolonisation' truly serves African empowerment. T w 's is a bold challenge to respect African intellectuals as innovative adaptors, appropriators and synthesizers of ideas they have always seen as universally relevant.