The World in a Grain of Sand: Postcolonial Literature and Radical Universalism (Paperback) 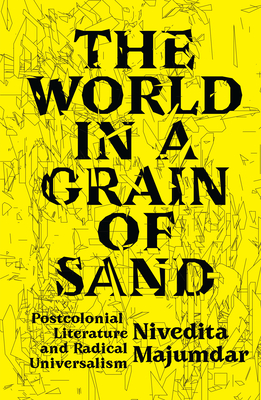 The World in a Grain of Sand: Postcolonial Literature and Radical Universalism (Paperback)

The World in a Grain of Sand offers a framework for reading literature from the global South that goes against the grain of dominant theories in cultural studies, especially, postcolonial theory. It critiques the valorization of the local in cultural theories typically accompanied by a rejection of universal categories - viewed as Eurocentric projections. But the privileging of the local usually amounts to an exercise in exoticization of the South. The book argues that the rejection of Eurocentric theories can be complemented by embracing another, richer and non-parochial form of universalism. Through readings of texts from India, Sri Lanka, Palestine and Egypt, the book shows that the fine grained engagement with culture, the mapping of ordinary lives not just as objects but subjects of their history, is embedded in much of postcolonial literature in a radical universalism - one that is rooted in local realities, but is able to unearth in them the needs, conflicts and desires that stretch across cultures and time. It is a universalism recognized by Marx and steeped in the spirit of anti-colonialism, but hostile to any whiff of exoticism.
Nivedita Majumdar is associate professor of English at John Jay College, City University of New York. She has published widely on Anglophone literature, gender, and cultural theory. Her book The Other Side of Terror was published by Oxford University Press, 2009.
“A bracing critique of postcolonial orthodoxy from a standpoint decisively to the left of it. Some books are enjoyable but not necessary; this one is both.”
—Terry Eagleton

“More than three decades after its intellectual and institutional beginnings, postcolonial theory must still learn to read—and how not to read—postcolonial literature. So argues, convincingly, Nivedita Majumdar in this careful and militantly progressive new work of postcolonial literary criticism and interpretation. A theory launched by high poststructuralism and a then stylish postmodernism’s cult of difference and allergy to universals trips over literary narratives that, on the contrary, have everything to do with the concrete universals inseparable from struggles against gender and class oppression. Whether, as Majumdar carefully demonstrates, these narratives (here mostly Anglo- and, refreshingly, non–Anglo-Indian) ultimately prove to be truthful reflections of such struggles and their underlying social realities or not, their genuinely critical reading presupposes a radical universalism at odds with many of the originating texts of postcolonial theory—a theory that Majumdar here goes a long way towards rectifying and redeeming.”
—Neil Larsen

“In crisp, honest, prose, Majumdar treats the academy’s postcolonial royalty with remarkable candor in a series of sharp, often acerbic, close readings. We too often call dissent what are really acts of accommodation, she argues, and ignore the real-world fiction of the periphery—the work, say, of Sharatchandra Chattopadhyay, Mahasweta Devi, and A. Sivanandan—who take their stand not with a classless ‘difference’ but with radical universalism. A compelling case that the darling texts of the Western awards industry (the novels of Ondaatje, Lahiri, and Neel Mukherjee) reflect troubling neo-Orientalist or neoliberal ideas.”
—Timothy Brennan

“In this vigorously discriminating and deeply engaged book, Professor Majumdar seeks to restore to Postcolonial Studies its pristine political purpose. Going beyond or behind the pervasive complicities of the Postcolonial with Cultural Studies, World Literature and the New Left, she argues for a more meaningful resistance based on the older certitudes of class struggle. She proposes an alternative Postcolonial canon in which the little-known Sharatchandra and Sivanandan are put forward as being more particular and therefore more universal than liberal global figures such as Tagore and Ondaatje. This return to the local, in her affirmation, is a more radical and universalist new turn.”
—Harish Trivedi, University of Delhi