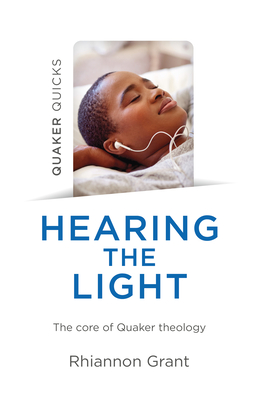 
Not On Our Shelves—Ships in 1-5 Days
Quaker Quicks - Hearing the Light begins with the foundations of Quaker theology, which is based in the Quaker method of unprogrammed, silent worship. This act of gathering as a community to wait and listen to God is at the heart of Quakerism and essential to understanding Quaker theology, which is embedded in the practice as well as explained by it. Rhiannon Grant shows how Central Quaker theological claims, such as that everyone has that of God within them, that God offers support and guidance to all who choose to listen, and that Quakers as a community are led by God to treat everyone equally, resist war, and live simply, can be understood through a consideration of this distinctive worship practice. Rhiannon Grant also explores what it means to say that this form of theology is liberal - although many Quakers are politically liberal, they have also been called conservative radicals (Kenneth Boulding), and the liberalism involved is not mainly political but an attitude towards diversity of thought, opinion, and especially religious belief. While united by the practice of unprogrammed worship, Quakers have no written creed and no specific beliefs are required of members. Instead, there is a prevailing attitude of continued searching, an acceptance that new evidence may appear, and a willingness to learn from others, including members of other faith communities. At a time of great religious and political division, this radical approach to faith and learning that Grant sheds light upon, has never been more prescient.
Rhiannon Grant teaches for Woodbrooke, where her areas of interest include Quaker uses of religious language, changing Quaker practices, feminist and Wittgensteinian understandings of religion, and multiple religious belonging. She writes about Quakers for general and academic audiences, and also writes fiction (her first novel, Between Boat and Shore, was published in 2019) and poetry (her poems have appeared in Blue Mountain Review, A New Ulster, Poethead, and other places). She lives in Selly Oak, UK.