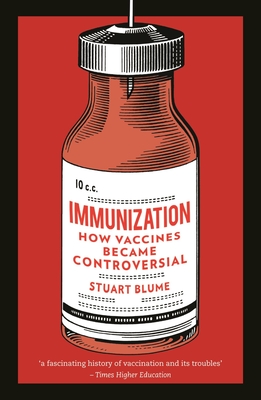 
Not On Our Shelves—Ships in 1-5 Days
As the world pins its hope for the end of the coronavirus pandemic to the successful rollout of vaccines, this book offers a vital long view of such efforts—and our resistance to them.

At a time when vaccines are a vital tool in the fight against COVID-19 in all its various mutations, this hard-hitting book takes a longer historical perspective. It argues that globalization and cuts to healthcare have been eroding faith in the institutions producing and providing vaccines for more than thirty years. It tells the history of immunization from the work of early pioneers such as Louis Pasteur and Robert Koch through the eradication of smallpox in 1980, to the recent introduction of new kinds of genetically engineered vaccines. Immunization exposes the limits of public health authorities while suggesting how they can restore our confidence. Public health experts and all those considering vaccinations should read this timely history.
Stuart Blume is professor emeritus of science and technology studies at the University of Amsterdam. Educated at the University of Oxford, he has previously worked at the University of Sussex, the London School of Economics, and in Whitehall.
"Blume grapples with the hot-button topic of immunization programs and public resistance to them in this persuasive, challenging chronicle of how vaccines improved human health—and the pharmaceutical industry’s bottom line. . . . Blume’s crucial history illustrates that vaccines have saved countless lives, but they must win the confidence of those who don’t recognize their universal benefit."
— Publishers Weekly, Starred Review

“This is a fascinating history of vaccination and its troubles.”
— Times Higher Education

"From vaccine hesitancy to virulent anti-vaccine views, parents are questioning what used to be considered a triumph of public health—vaccines. As so often happens with debates on controversial issues, emotion often trumps information. . . . [Immunization] offer[s] refreshingly fact-based alternatives to the vitriol dominating the current conversation on vaccines. . . . From Cold War politics to neoliberal economics, Blume puts policy and advancement into a broader context in which public health sometimes takes a back seat to other, less noble concerns. His central argument, articulated in the final chapter, is that vaccine hesitancy is rooted in mistrust of the institutions that promote them—especially governments and pharmaceutical companies. . . . Readers who wish to be informed of the current debate and issues surrounding it will appreciate the clear, fact-based approach."
— Library Journal

"In his thought-provoking book, Blume carefully explains how exactly vaccines protect the human body, before going on to explore the worrying phenomenon that has come to be dubbed ‘vaccine hesitancy’—the reluctance of some parents to have their children vaccinated."
— Prospect

"Reaktion is rushing through this paperback on the history of vaccination given its topicality, and the message it can bring to anti-vaxxers. It looks at why growing numbers of parents are becoming opposed to vaccinating their children, and at the multinationals who now dominate vaccine development and production, arguing that globalization and healthcare deficiencies are eroding faith in the institutions producing and providing vaccines."
— Bookseller

"Blume’s latest book is a timely political intervention into the vaccination debate. He expertly summarizes the history of vaccine technology and vaccination policy to explain how and why certain publics have questioned the need to vaccinate themselves or their children. The author outlines the role of public and private institutions, the dynamics between the global north and south, and implores all those with a stake in public health to work to restore trust in vaccination systems. . . . Anyone studying the history of vaccination should read this book. It provides both an excellent summary of the history and a powerful political argument to begin further discussion."
— Social History of Medicine

"While the book provides an interesting social history and an attempt to understand why people resist vaccinations, it also serves as a reminder that it’s a privilege of the developed world to be able to approach a matter of public health and saving lives as a philosophical concern."
— Health Affairs

"A much-needed historical analysis of the global dynamics in vaccine development and vaccination policies. . . . This is an important book, primarily because of its global perspective on the question how vaccines became controversial."
— Isis

“This is an important, comprehensive, and pathbreaking book. Eschewing simplistic, unipolar notions of the planning and delivery of international health, it places the history and contemporary provision of immunization on a truly global scale. This is a study that looks at all facets of a complex subject, where the troubled birth and expansion of the use of vaccines is examined thoroughly and fairly. This is scholarship at its richest, which reminds us all about the dangers of technological determinism in all matters of public health. A must read for academic, government, and international health agency audiences, especially those committed to the equitable introduction of vaccines around the world on the basis of careful and transparent consultations with target societies.”
— Sanjoy Bhattacharya, director, Centre for Global Health Histories, University of York, and head, WHO Collaborating Centre for Global Health Histories

“Blume’s Immunization is a clearly written, brilliant, and highly sophisticated look at the roots of the growing phenomenon of ‘vaccine hesitancy.’ He rejects the dominant, and superficial interpretation by public health officials of what is going on, and shows the reader what insights occur when you really stop and listen to what people are saying rather than assuming you already know what motivates them and pigeon-holing their supposed views into various unflattering categories.”
— William Muraskin, Queens College, City University of New York

“Immunization provides great insight into the vaccination issue precisely because it avoids the easy generalizations made by partisans on either side. Blume more usefully points to the complexities and contradictions in the history and social dynamics of vaccination. He presents vaccination as a technology, and as just one of several approaches to promoting health, and thus to be judged in a wider context than a narrow calculation of benefits and risks. Immunization is essential reading for anyone who wants to get beyond the usual polarized positions in the vaccination debate.”
— Brian Martin, University of Wollongong, Australia