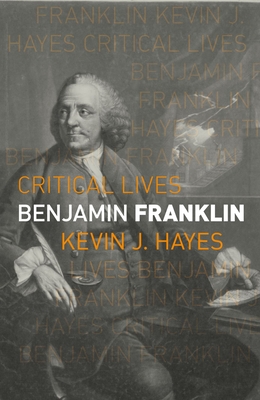 
On Our Shelves Now at:
An action-packed retelling of the life and work of the polymath and so-called First American, Benjamin Franklin.

All Benjamin Franklin biographers face a major challenge: they must compete with their subject. In one of the greatest autobiographies in world literature, Franklin has already told his own story, and subsequent biographers have often taken Franklin at his word. In this exciting new account, Kevin J. Hayes takes a different approach.

Hayes begins when Franklin is eighteen and stranded in London, describing how the collection of curiosities he viewed there fundamentally shaped Franklin’s intellectual and personal outlook. Subsequent chapters take in Franklin’s career as a printer, his scientific activities, his role as a colonial agent, his participation in the American Revolution, his service as a diplomat, and his participation in the Constitutional Convention. Containing much new information about Franklin’s life and achievements, Hayes’s critical biography situates Franklin within his literary and cultural milieu.
A recipient of the George Washington Book Prize, Kevin J. Hayes lives and writes in Toledo, Ohio. He has published widely on American literature, history, and culture, including The Road to Monticello: The Life and Mind of Thomas Jefferson and George Washington: A Life in Books.
“Hayes has given us an engaging companion to Benjamin Franklin’s Autobiography, and much more. From interesting stories and oft-omitted facts, Hayes weaves a rich and colorful tapestry of each act of a life that Franklin himself compared to a play. Informative and insightful, well-researched and marvelously comprehensive for its brevity, Hayes’s book is pound-for-pound one of the best introductions to our greatest American Founder.”
— Kevin Slack, Hillsdale College, Michigan, and author of "Benjamin Franklin, Natural Right, and the Art of Virtue"