Calling the Spirits: A History of Seances (Paperback) 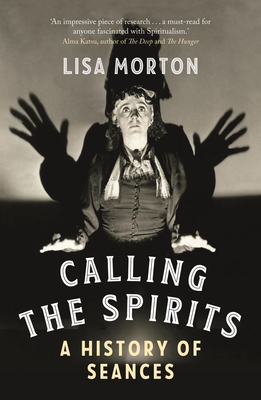 Calling the Spirits: A History of Seances (Paperback)


On Our Shelves Now at:
From Halloween expert Morton, a level-headed and entertaining history of our desire and attempts to hold conversations with the dead.

Calling the Spirits investigates the eerie history of our conversations with the dead, from necromancy in Homer’s Odyssey to the emergence of Spiritualism—when Victorians were entranced by mediums and the seance was born. Among our cast are the Fox sisters, teenagers surrounded by “spirit rappings”; Daniel Dunglas Home, the “greatest medium of all time”; Houdini and Sir Arthur Conan Doyle, whose unlikely friendship was forged, then riven, by the afterlife; and Helen Duncan, the medium whose trial in 1944 for witchcraft proved more popular to the public than news about the war. The book also considers Ouija boards, modern psychics, and paranormal investigations, and is illustrated with engravings, fine art (from beyond), and photographs. Hugely entertaining, it begs the question: is anybody there . . . ?
Lisa Morton is an award-winning author and widely acknowledged as one of the world’s leading authorities on the supernatural. Her work includes The Halloween Encyclopedia and A Hallowe’en Anthology: Literary and Historical Writings Over the Centuries.
"It’s not only fearful fiction that is having a moment. With the world full of real-life terrors, nonfiction writers are also responding. Informational texts about horror have traditionally been limited to local ghost tales or explorations of horror in film. Now, authors are entering new territory that goes beyond the confines of the genre. Morton, the world’s eminent expert on Halloween, has a fascinating new book, Calling the Spirits: A History of Seances, a fun and thorough look at how humans have tried to communicate with the dead over time."
— Library Journal

"Morton is clearly skeptical of most of the claims made for séances and the phenomena of Spiritualism, but presents the claims of those involved in an even-handed manner, whilst also presenting the voices of those, throughout history, who have found no evidence for the reality of any form of postmortem communication. The fascinating history of séances is filled with mystery, deception, self-deception, genuine belief, scientific inquiry, and personal transformation, which is well described in this extremely interesting and readable account."
— Magonia Review of Books

"While Victorian obsessions are the meat of Calling the Spirits, it is bookended by the necromancy of the ancients and modern séances. . . . Morton’s book will interest anyone whose ancestors claimed psychic powers."
— Who Do You Think You Are?

"An ambitious primer on the history of Spiritualism, . . . Calling the Spirits is engagingly written, well illustrated, and up-to-date."
— Journal of the Society for Psychical Research

"In Calling the Spirits, Morton has provided the immediate turn-to book on the subject of mediums and seances."
— The Pilgrim

"Morton tells the story of Spiritualism, writ large, in a highly readable book that provides a succinct, though impressively nuanced, summary of an otherwise sprawling social movement and religion."
— Nova Religio

"A level-headed and entertaining history of our desire and attempts to hold conversations with the dead. Calling the Spirits investigates the eerie history of our conversations with the dead, from necromancy in Homer’s Odyssey to the emergence of Spiritualism — when Victorians were entranced by mediums and the seance was born . . . Hugely entertaining."
— New Books Network

"An impressive piece of research. . . . Calling the Spirits is a must-read for anyone fascinated with Spiritualism."
— Alma Katsu, author of "The Deep" and "The Hunger"