The Story of the Greeks: A History of Ancient Greece for Children; the Athenians, Spartans, their Cultures, Wars and Gods (Paperback) 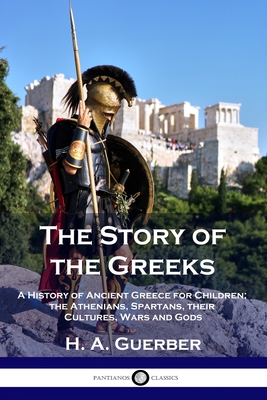 The Story of the Greeks: A History of Ancient Greece for Children; the Athenians, Spartans, their Cultures, Wars and Gods (Paperback)

Ancient Greek history is full of fascinating events and adventures, with the refined culture and many Gods of olden Greece a highlight - this history, aimed at younger readers, summarizes the great civilization.

Experienced historian and author Helene Guerber tells her history as a series of short and poignant stories. We hear of the founding of early cities such as Athens and Thebes, and the famous myths that would gradually grow to form the pantheon of Greek Gods and legends. The artistic and cultural styles introduced by ancient Greek artisans and craftsmen, the pioneering philosophies of Plato and Socrates, and the settlers who colonized southern Italy are all mentioned.

We also hear about the wars and conflicts which were frequent in ancient Greece, becoming part of its literature and mythos. The siege and conquest of Troy, the Peloponnesian War, and the battles between the rival Athenian city states and the Spartans are described. Greece was innovative in war, being among the first civilizations to have organized units such as the hoplites and companion cavalry, and bringing the earliest artillery to the battlefield.