The Partisan Court: The Era of Political Partisanship on the U.S. Supreme Court (Hardcover) 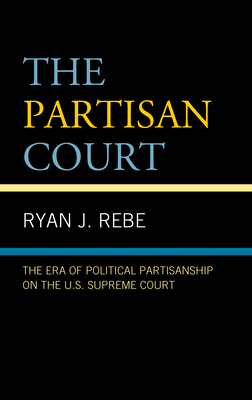 The Partisan Court: The Era of Political Partisanship on the U.S. Supreme Court (Hardcover)


Not On Our Shelves—Ships in 1-5 Days
(This book cannot be returned.)
The Era of Political Partisanship on the U.S. Supreme Court challenges conventional notions of consensus-building and neutral decision-making on the U.S. Supreme Court and argues that the justices vote their partisan preferences on election law cases. By focusing specifically on election law, Rebe reveals a consistent pattern of partisanship on the Court. The findings controvert popular perceptions of non-biased decision-making and fundamental fairness. The aggregate analysis shows that the justices vote along party-lines in a majority of election law cases, and consensus-building is rare when there is a contentious electoral issue at stake. Moreover, these decisions often conflict with principles of stare decisis, originalism, or judicial restraint. The topics covered include: gerrymandering, campaign finance, voter ID laws, and mail-in voting, among others. Rebe also conducts a content analysis of the most controversial election law cases of the past twenty years, such as: Vieth v. Jubelirer, Crawford v. Marion County, Citizens United v. FEC, and Shelby County v. Holder. This book provides a thorough overview of two decades of election law cases and sheds light on the impact these decisions have had on remaking America's electoral institutions.
Ryan J. Rebe is associate professor of political science and Director of Legal Studies at William Paterson University in New Jersey.