Literary Biographies in the Lives of Remarkable People Series in Russia: Biography for the Masses (Crosscurrents: Russia's Literature in Context) (Hardcover) 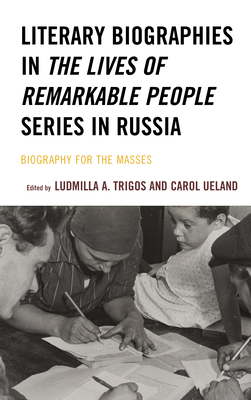 Literary Biographies in the Lives of Remarkable People Series in Russia: Biography for the Masses (Crosscurrents: Russia's Literature in Context) (Hardcover)


Not On Our Shelves—Ships in 1-5 Days
(This book cannot be returned.)
The legendary Russian biography series, The Lives of Remarkable People, has played a significant role in Russian culture from its inception in 1890 until today. The longest running biography series in world literature, it spans three centuries and widely divergent political and cultural epochs: Imperial, Soviet, and Post-Soviet Russia. The authors argue that the treatment of biographical figures in the series is a case study for continuities and changes in Russian national identity over time. Biography in Russia and elsewhere remains a most influential literary genre and the distinctive approach and branding of the series has made it the economic engine of its publisher, Molodaia gvardiia. The centrality of biographies of major literary figures in the series reflects their heightened importance in Russian culture. The contributors examine the ways that biographies of Russia's foremost writers shaped the literary canon while mirroring the political and social realities of both the subjects' and their biographers' times. Starting with Alexander Pushkin and ending with Joseph Brodsky, the authors analyze the interplay of research and imagination in biographical narrative, the changing perceptions of what constitutes literary greatness, and the subversive possibilities of biography during eras of political censorship.
Ludmilla A. Trigos is an independent scholar. Carol Ueland is professor emerita of Russian at Drew University.