Reinventing American Jurisprudence: Law Through the Lens of Value (Hardcover) 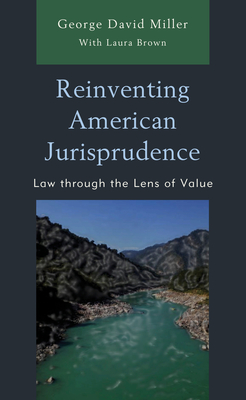 Reinventing American Jurisprudence: Law Through the Lens of Value (Hardcover)


Not On Our Shelves—Ships in 1-5 Days
(This book cannot be returned.)
In Reinventing American Jurisprudence: Law through the Lens of Value, George David Miller and Laura Brown unfurl an original approach to value and an imaginative landscape in philosophy of law. Value essentialism identifies value formations such as a sacred cow and scapegoat tandem and the intensification of "oughtness" as it approaches sacred zenith values. Readers learn how Occam's razor has been responsible for the death of many ideas; how the celebrated Other gains nuance as near and remote; and where a spectral assessment of probability and necessity leads. Analyses of Supreme Court cases grow out in different and exciting directions. Buck was not about eugenics, but another iteration of the value of efficiency and Yo Wick was decided less on law and more on a justice's finding humanity in Chinese laundry mat proprietors. Lochner involved not an ideological binary but three distinct value schemes. "Separate but equal" was refined as parallelism and exploitative tangents. In Brown, the Fourteenth Amendment took a significant subjective turn. In Heller, the communitarian position of stopping violence before it began could be contrasted with the individualistic position of waiting until you see the whites of their eyes in your bedroom. Citizens United was distilled into the question: was the First Amendment designed to maximize participation or maximize democracy?
George David Miller is retired philosophy professor and president of Before I Read This Poem, a platform from which he has delivered thousands of writing workshops and performance poetry shows over the past three decades.