Next Stop Execution: The Autobiography of Oleg Gordievsky (Paperback) 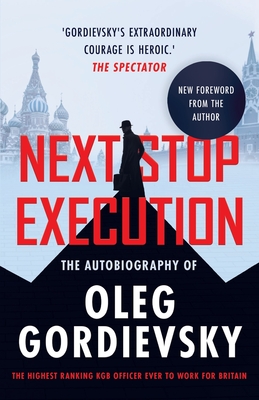 Next Stop Execution: The Autobiography of Oleg Gordievsky (Paperback)


Not On Our Shelves—Ships in 1-5 Days
Oleg Gordievsky was the highest ranking KGB officer ever to work for Britain.

For eleven years, from 1974 to 1985, he acted as a secret agent, reporting to the British Secret Intelligence Service while continuing to work as a KGB officer, first in Copenhagen, then in London.

He provided Western security organizations with such a clear insight into the mind and methods of the KGB and the larger Soviet government that he has been credited with doing more than any other individual in the West to accelerate the collapse of Communism.

In this thrilling memoir, Gordievsky lays out his extraordinary, meticulously planned escape from Russia, a story that has been described as 'one of the boldest and most extraordinary episodes in the history of spying.' (Ben Macintyre - The Times)

Peopled with bizarre, dangerous and corrupt characters, Gordievsky introduces the reader to the fantastical world of the Soviet Embassy, tells of the British MPs and trade unionists who helped and took money from the KGB, and reveals at last what the author told Margaret Thatcher and other world leaders which made him of such value to the West.

Gordievsky's autobiography gives a fascinating account of life as a secret agent. It also paints the most graphic picture yet of the paranoid incompetence, alongside the ruthless determination, of the all-encompassing and sometimes ridiculous KGB.

Oleg Gordievsky was born in Moscow in 1938. He attended the Moscow State Institute of International Relations where he specialized in German. He was sent to East Berlin as a diplomatic trainee in August 1961. Two days after his arrival, the Wall went up. In 1962 he joined the KGB and was posted to Copenhagen and London. He worked as a secret agent for eleven years until his dramatic escape to the West in 1985. He is the author of KGB: The Inside Story.