The Interpretation of Dreams (Great Works that Shape our World) (Hardcover) 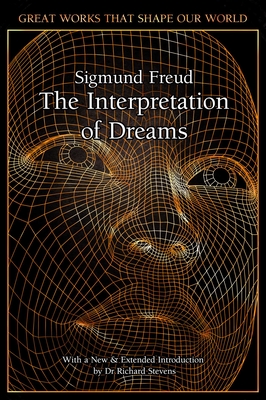 The Interpretation of Dreams (Great Works that Shape our World) (Hardcover)


Not On Our Shelves—Ships in 1-5 Days
The Interpretation of Dreams is a seminal work of psychological and cultural heritage and probably the most important of Freud’s impressive output. Published in 1899 but revised by Freud himself many times, it outlines his theories on the unconscious and dream symbolism. Though largely discredited and superseded by subsequent developments and research, it retains its place as a hugely influential and significant opus. This new deluxe edition uses A.A. Brill’s 1913 translation of the third edition, with a new introduction by expert Dr Richard Stevens, who discusses the context, reception, influence, importance and merits or otherwise of Freud’s text and Brill’s translation – truly one of the most influential, if controversial, Great Works that Shape Our World.

FLAME TREE's Great Works That Shape Our World is a new series of definitive books drawing on ancient, medieval and modern writing. Offering a fund of essential knowledge, and spell-binding stories it satisfies every facet of human interest: scientific, philosophical, sociological, romantic, dramatic and mysterious.
The famously influential neurologist and founder of psychoanalysis, Sigmund Freud (1856–1939) was born in a small town in what is now the Czech Republic. The family later moved to Vienna, where Freud would excel in his education, entering the medical faculty at the University of Vienna when he was 17. After studying philosophy, physiology and zoology he gained his MD in 1881. He worked in a practical capacity in a hospital and conducted cerebral anatomy research, but in 1886 set up in private clinical practice in treating ‘nervous disorders’ and would go on to develop the various techniques associated with psychoanalysis, as well as his famous theories on the unconscious, the human psyche, dreams and sexuality – leading to the publication of many works, of which The Interpretation of Dreams (1899), Beyond the Pleasure Principle (1920), The Ego and the Id (1923) and Civilization and Its Discontents (1930) are just a few examples.

Previously Head of Psychology at the Open University, Richard Stevens holds a first-class degree in Psychology from the University of Edinburgh as well as an MA (Trinity College Dublin) and a PhD by published work. He has been Chair of the Association for Humanistic Psychology in Britain and helped to found the Consciousness and Experiential Section of the British Psychological Society. His books include Freud and Psychoanalysis and Understanding the Self and he has numerous publications in academic and other journals.