1984 and the Crisis of Sikhism (Hardcover) 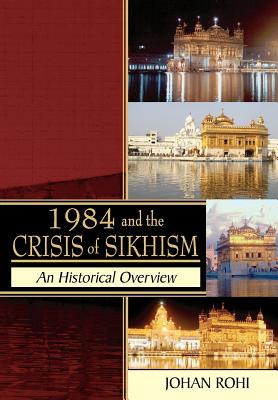 1984 and the Crisis of Sikhism (Hardcover)


Not On Our Shelves—Ships in 1-5 Days
(This book cannot be returned.)
TerritoryAfter five hundred years and with twenty million followers, Sikhism is unable to lay claim to an inch of this planet and call it its own. FaithSikhism is not a creed but a sect, a religious cult and an instrument for aligning the organisation of our social functions. we conduct them with the help of our holy book. DisasterIn June 1984, the Sikhs' most sacred shrine, the Golden Temple at Amritsar, was the scene of an armed stand-off between Sikhs and the State that ended in bloodshed. In October the same year, the Indian prime minister, Indira Gandhi, was assassinated by her trusted Sikh bodyguards. Lawlessness hit the Panjab, and by the time Indian Government troops had restored order, thousands lay dead, women had been widowed, killed or raped, and children found themselves orphaned. Johan Rohi's detailed and at times shocking expos of the history and practices of Sikhism reveals a cult in crisis. For every ten true believers, there are a thousand gullible sheep feeding on the words of a grasping clergy. Yet Sikhs have no leader and no homeland. What is the function of religion in their collective psyche and aspirations? What part does extremism play? Why the insistence on symbols and carrying arms? At a broader level, the author touches on the issue of any religion having a role in our increasingly materialistic and secular global community.