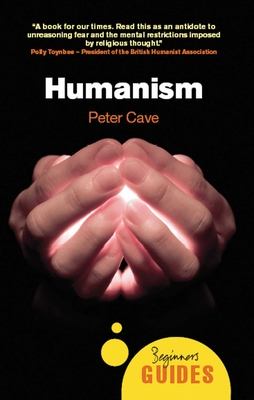 
Special Order—Subject to Availability
The quintessential guide to living a meaningful life without God.

Why should we believe in God without any evidence? How can there be meaning in life when death is final? With historical adherents including such thinkers as Einstein, Freud, Philip Pullman, and Frank Zappa, "Humanism"'s central quest is to make sense of such questions, explaining the ethical and metaphysical by appealing to shared human values, rationality, and tolerance. Essential reading for atheists, agnostics, ignostics, freethinkers, rationalists, skeptics, and believers too, this Beginner's Guide will explain all aspects of the Humanist philosophy whilst providing an alternative and valuable conception of life without religion.
Writer and broadcaster Peter Cave teaches philosophy for The Open University and City University London. Author of the bestselling Can A Robot Be Human?, he chairs the Humanist Philosophers’ Group, frequently contributes to philosophy journals and magazines, from the academic to the popular, and has presented several philosophy programmes for the BBC. He lives in London.
"Some religious commentators say that the humanist life is immoral because it is godless; that it is meaningless because it knows of no deity or afterlife and there are only a few humanists in the UK compared with the number of godbelievers. They are wrong on all counts as this splendid book makes clear. Humanism is loving, sharing and caring and above all an intelligent philosophical way to make the best of our own and our neighbours’ lives. I could not commend it more."
— Clare Rayner - Broadcaster, writer and Vice President of the British Humanist Association

"An admirable guide for all those non-religious (surely the true ‘silent majority’?) who may wake up to the fact that they are humanists … What we have in common is, indeed, not faith but our humanity."
— Sir Bernard Crick - Emeritus Professor of Birkbeck College, University of London, and author of Demo

"Peter Cave brings to a serious subject his characteristic wit and humour, as well as wide knowledge and sharp insight. This is a very readable introduction to humanism – and a deeply human one."
— Richard Norman - Emeritus Professor of Moral Philosophy, University of Kent