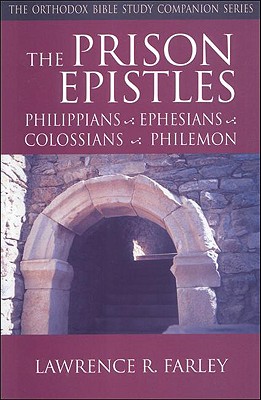 
Not On Our Shelves—Ships in 1-5 Days
(This book cannot be returned.)
From the depths of a Roman prison, words of encouragement and instruction flowed from the tongue of the great Apostle Paul. Written down by scribes, his words went forth as a series of letters to Christian communities throughout the Roman Empire. The Apostle Paul may have been fettered and shackled to a series of Roman guards, but the Word he preached remained unfettered and free. This volume contains commentaries on the epistles to the Philippians, Ephesians, Colossians, and Philemon-which were written while the Apostle Paul was in prison. About the Orthodox Bible Study Companion Series: This commentary was written for your grandmother and for your plumber. That is, it was written for the average layperson, for the nonprofessional who feels a bit intimidated by the presence of copious footnotes, long bibliographies, and all those other things which so enrich the lives of academics. Working from a literal translation of the original Greek, this commentary examines the text section by section, explaining its meaning in everyday language. Written from an Orthodox and patristic perspective, it maintains a balance between the devotional and the exegetical, feeding both the heart and the mind.