The Integrity of the Book of Isaiah: New Evidence of Single Authorship (Paperback) 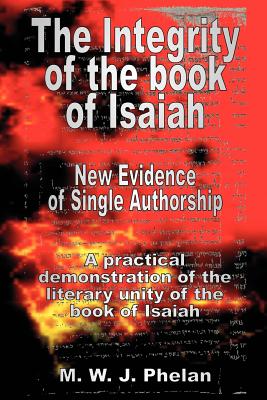 The Integrity of the Book of Isaiah: New Evidence of Single Authorship (Paperback)


Not On Our Shelves—Ships in 1-5 Days
(This book cannot be returned.)
For over two thousand years the book of Isaiah was accepted as the exclusive work of the son of Amoz, the friend of Hezekiah. The translators of the Septuagint regarded the book as a single work. The well-known discovery at Qumran in 1947 of two different copies of Isaiah also testifies to its unity. One of these scrolls is virtually complete and is normally dated to the late second century BCE. The New Testament adds its very considerable, and for the believer, decisive weight to the traditional viewpoint, as may be seen from the eighty-seven occasions where it cites the prophet's words. In addition to this, the Masoretic Text, the standard Hebrew text of the Hebrew Canon, and the unanimous testimony of all the ancient texts, versions, Jewish traditions, and the early Christian Church, report the book to be a single work. At the end of the eighteenth century however, this view that had held sway for millennia began to be challenged. Isaiah, it was asserted was a compilation by different authors, and various so-called proofs of this were brought forth by the critics. Since then, this view-point has gained a massive momentum so that it is now considered to be the orthodox scholarly position. We are assured that critical scholarship has demonstrated the separate existence of the work of no less than three authors, usually referred to as Proto-Isaiah, Deutero-Isaiah, and Trito-Isaiah. The issues raised by this challenge to the traditional belief, are firstly and obviously, that the Hebrew Canon is charged with containing pseudonymous works, but secondly, and more importantly, the authority of the New Testament is gravely undermined, as the twenty-one occasions where Isaiah is referred to by name, relate to every section of the book, and, therefore, to all three of the modernist's authors. Either the evangelists and Paul were unaware of what has supposedly been unearthed by the critics, and thereby face the charge of gross ignorance; or they were not ignorant at all, but accommodated themselves to the prejudices of those they wrote for, and, thereby, knowingly and deliberately maintained a falsehood. For believers then, the matter is not merely of academic interest, but affects his or her faith in the Inspiration of the New Testament. A New Testament that through ignorance or deliberate policy propagates and maintains a falsehood cannot be Divinely Inspired, or relied upon as our guide in the most vital issues which confront us all, the issues of life and death in their eternal dimensions. Clearly then the matter must be resolved, and either the New Testament, or the views of the critics must be abandoned; the matter is as stark as that.