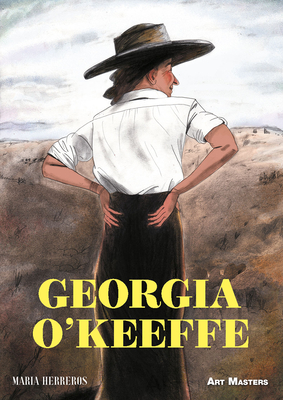 
On Our Shelves Now at:
A graphic biography of Georgia O’Keeffe, one of the most significant artists of the 20th century, known for her paintings of enlarged flowers and renowned for her contribution to modern art

Georgia O’Keeffe (1887–1986), the American artist known for her paintings of enlarged flowers, New York skyscrapers, and New Mexico landscapes, was one of the most significant artists of the 20th century. During her lifetime, which spanned almost a century, she became widely recognized for her enormous contribution to modern art. Drawing mainly from O’Keeffe’s letters, which are depicted in this biography, artist María Herreros delves into O’Keeffe’s deepest self: a tireless traveler, a nature lover, a strong and emancipated woman who carved her own determined path through life and did it her way.

María Herreros has a degree in fine arts from the University of Valencia. She is an illustrator, muralist, and comic book creator. Involved in artistic and social projects all over the world, she focuses on gender equality and social justice. Herreros has collaborated with brands such as Coca-Cola and Reebok, and has exhibited her works in galleries in Barcelona, Madrid, Berlin, Hong Kong, Los Angeles, New York, and Seoul. Her most recent collaboration on an illustrated book was Viva la Dolce Vita, with Máximo Huerta (Lunwerg, 2019). She lives in Madrid.