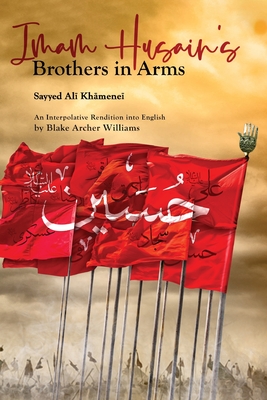 Imam Husain's Brothers in Arms consists of a series of ten lectures delivered by Ayatollah Khamenei in the month of Muharram of 1393 (September 1972), approximately seven years prior to the triumph of the Islamic Revolution of Iran.

The main thesis of the book goes against the millennial consensus of scholarly opinion that holds that the Imams were basically apolitical. Ayatollah Khamenei posits arguments based on scriptural as well as rational proofs of the politicism of all of the Imams, stating that every one of the Imams was engaged in a concerted clandestine effort to overthrow the Umayyad and later Abbasid political orders, the differences being one of tactics, which varied to suit the conditions current at the time. Ayatollah Khamenei in doing so explores historical events analytically as well as unpacking critical theological beliefs of the Sh'ia around Imamah, jihad and taqiyya.

With the translation of these lectures, the English-speaking public can judge the cogency of Ayatollah Khamenei's arguments for themselves on this most central issue in the political discourse of Islam. The reader will realize that it is not a thesis that can easily be dismissed and that it is one that opens huge unexplored and highly stimulating insight into the revival of the political discourse in Islam.