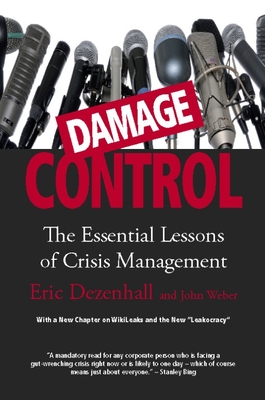 
Special Order—Subject to Availability
No one knows this better than Eric Dezenhall and John Weber, who help companies, politicians, and celebrities get out of various kinds of trouble. In this brutally honest and eye-opening guide, they take you behind the scenes of some of the biggest public relations successes--and debacles--of modern business, politics, and entertainment.
You'll discover:
- Why the 1982 Tylenol cyanide-poisoning case is always cited as the best model for damage control, when in fact it has no relevance to the typical corporate crisis.
- Why Audi never fully recovered from driver accusations of "sudden acceleration"--despite evidence that nothing was wrong with their cars.
- What the crises faced by George W. Bush, Jim McGreevey, Sammy Sosa, Lance Armstrong, Martha Stewart, Coca-Cola, and the Catholic Church have in common . . . and what they don't. This new revised edition includes an additional chapter Our Permanent Leakocracy including information about WikiLeaks and what that notorious case means for business.

Eric Dezenhall is the CEO of Dezenhall Resources in Washington, D.C. He began his career in the White House Office of Communications during the Reagan presidency. Prior to starting his own firm, he worked at an international public relations agency and a political consulting firm. He is also the author of Nail 'Em: Confronting High-Profile Attacks on Celebrities and Businesses. His forthcoming novel The Devil Himself will be published by Thomas Dunne/St. Martin's in the summer of 2011.John Weber is the president of Dezenhall Resources and the firm's second partner. He oversees client services and is the primary liaison with its affiliate agencies in the United States and Europe. Weber previously served as a senior manager at three of the world's largest public relations firms. He began his career in marketing and advertising.

A mandatory read for any corporate person who is facing a gut-wrenching crisis now or is likely to one day - which of course means just about everybody. -- Stanley Bing

I do this kind of stuff for a living, and this book gave me chills. Corporate executives pay consultants fifty grand a month for advice a whole lot less intelligent and compelling than this. Now for just a few bucks they can get this book, put it under their pillows, and sleep well at night, if they sleep at all. -- Gil Schwartz, executive vice president, CBS Corporation