Pioneers of the Game: The Evolution of Men's Professional Tennis - Second Edition (Paperback) 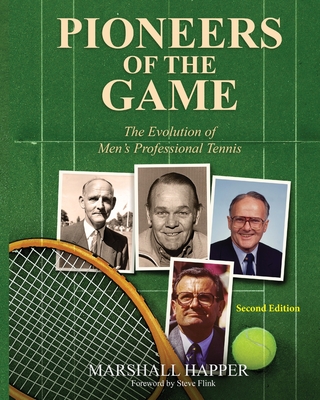 Pioneers of the Game: The Evolution of Men's Professional Tennis - Second Edition (Paperback)

This is the updated Second Edition of the saga and history of the inside struggles and conflicts of the "Pioneers of the Game" of Tennis, a small group of international visionaries and activists responsible for the development of men's professional tennis. The book documents the Pioneers' 40-year competition between amateur and professional tennis, eventual approval of Open Tennis in 1968 and the creation and development of the business, administration and governance of tennis as a professional Sport between 1968 and 1990. Written by Marshall Happer, who was the first and only "Commissioner" of men's professional tennis from 1981 to 1989, it documents the role of the International Tennis Federation in the development of men's professional tennis, the 16-year history of the Men's Tennis Council, the founding of the Association of Tennis Professionals in 1972 and its demise as a pure player association in 1990. Also included is what happened between 1990 and the present after governance of the sport was divided. Everyone involved in men's professional tennis today stands on the shoulders of the Pioneers of the Game. This invaluable, historical resource profiles, honors and ranks the Pioneers, featuring the likes of Jack Kramer, Philippe Chatrier, Lamar Hunt, Tony Trabert, Arthur Ashe, Cliff Drysdale, and many others. Also included are the winners and finalists of the Grand Slams from 1919-1967, and the most complete tournament results for the "golden years" of 1968-1989, when the leading players were Ken Rosewall, Rod Laver, John Newcombe, Arthur Ashe, Stan Smith, Ilie Nastase, Jimmy Connors, Bjorn Borg, John McEnroe and Ivan Lendl.