Behold Your Mother: A Biblical (Paperback) 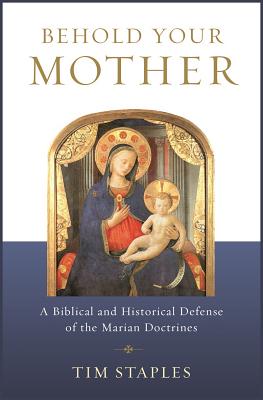 Behold Your Mother: A Biblical (Paperback)


Not On Our Shelves—Ships in 1-5 Days
From the cross Jesus gave us his mother to be our mother, too: a singularly holy model, consoler, and intercessor for our spiritual journey. Yet most Protestants, and too many Catholics don't understand the role that God wants her to play in our lives. In Behold Your Mother, Tim Staples takes you through the Church's teachings about the Blessed Virgin Mary, showing their firm Scriptural and historical roots and dismantling the objections of those who mistakenly believe that Mary competes for the attention due Christ alone. Combining the best recent scholarship with a convert's in-depth knowledge of the arguments, Staples has assembled the most thorough and useful Marian apologetic you'll find anywhere. Relevant and essential -- Mary matters. Read Behold Your Mother and find out just how much.
Tim Staples is Senior Apologist at Catholic Answers, but he was not always Catholic. Tim was raised a Southern Baptist. Although he fell away from the faith of his childhood, Tim came back to faith in Christ during his late teen years through the witness of Christian televangelists. Soon after, Tim joined the Marine Corps. During his four-year tour, he became involved in ministry with various Assemblies of God communities. Immediately after his tour of duty, Tim enrolled in Jimmy Swaggart Bible College and became a youth minister in an Assembly of God community. During his final year in the Marines, however, Tim met a Marine who really knew his faith and challenged Tim to study Catholicism from Catholic and historical sources. That encounter sparked a two-year search for the truth. Tim was determined to prove Catholicism wrong, but he ended up studying his way to the last place he thought he would ever end up: the Catholic Church! He converted to Catholicism in 1988 and spent the following six years in formation for the priesthood, earning a degree in philosophy from St. Charles Borromeo Seminary in Overbrook, Pennsylvania. He then studied theology on a graduate level at Mount St. Mary's Seminary in Emmitsburg, Maryland, for two years. Realizing that his calling was not to the priesthood, Tim left the seminary in 1994 and has been working in Catholic apologetics and evangelization ever since.