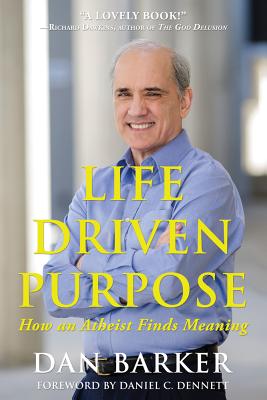 
Backordered
Every thinking person wants to lead a life of meaning and purpose. For thousands of years, holy books have told us that such a life is available only through obedience and submission to some higher power. Today, the faithful keep popular devotionals and tracts within easy reach on bedside tables and mobile devices, all communicating this common message: “Life is meaningless without God.” In this volume, former pastor Dan Barker eloquently, powerfully, and rationally upends this long-held belief. Offering words of enrichment, emancipation, and inspiration, he reminds us how millions of atheists lead happy, loving, moral, and purpose-filled lives. Practicing what he preaches, he also demonstrates through his own personal journey that life is valuable for its own sake—that meaning and purpose come not from above, but from within.
Dan Barker, a former evangelical minister, is copresident of the Freedom from Religion Foundation, cohost of Freethought Radio, and cofounder and board member of the Clergy Project. He is the author of Godless: How an Evangelical Preacher Became One of America's Leading Atheists. A widely sought-after lecturer, debater, and performer, he regularly discusses atheism and life’s meaning and purpose in the national media, with appearances on the Oprah Winfrey Show, O'Reilly Factor, Good Morning America, and many others. He lives in Madison, Wisconsin. Daniel C. Dennett is the codirector of the Center for Cognitive Studies and the Austin B. Fletcher Professor of Philosophy at Tufts University. He is the author of several books, including Breaking the Spell: Religion as a Natural Phenomenon and Darwin’s Dangerous Idea: Evolution and the Meanings of Life. He lives in North Andover, Massachusetts.
“A lovely book!”  —Richard Dawkins, author, The God Delusion

“One of the biggest misconceptions about atheists is that without God they can have no morals, values, or meaning in their lives. In this lovely secular sermon, Dan Barker handily rebuts that claim, showing that true meaning and morality can come only from accepting our finitude, and dealing with it rationally and humanistically.”  —Jerry Coyne, author, Why Evolution Is True

“Dan Barker has cleverly reversed the arrows of purpose so they fly from the bows of life instead of raining down from an imaginary archer in the sky.”  —Victor J. Stenger, author, God: The Failed Hypothesis