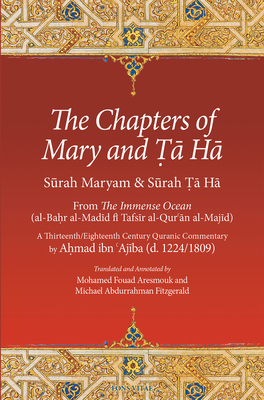 
Not On Our Shelves—Ships in 1-5 Days
The Chapters of Mary and Ta Ha center on the key figures of Islam’s two sister monotheisms, Mary, mother of Christ, and Moses. Ibn ‘Ajiba’s commentaries on these two surahs give reader access not only to the traditional Islamic view of these prophetic figures, but also on metaphors and symbols to be found in their stories that can of use to anyone following an inner path to God. The Chapter of Mary, in particular, gives readers access to the story of Christ through the perspective of the woman who was chosen to bear him. The Immense Ocean from which this is an excerpt, is a prime example of writing from the North African Sufic tradition. Al-Bahr al-Madid, from which this translation is an excerpt, is the only traditional Quranic commentary in existence which gives both exoteric exegesis and mystical “spiritual allusion” for each verse of the Sacred Book. Since the completion of its publication in 2002, the Arabic version of al-Bahr al-Madid, which existed only in manuscript form before a small excerpt was printed in the 1950s, has sold out three editions. This is a testimony both to its popularity and to a revival of interest in Sufic thought throughout the Muslim world.
After growing up in a traditional Marrakesh family, the son of an Arabic teacher and grandson of one of the most renowned Quran teachers in Marrakesh, Fouad Aresmouk completed his degree in Islamic Studies and Arabic at Qadi Ayyad University, Marrakesh. He is the author of al-Rashad fi zabdati al-awrad, a mystical commentary on the litany of the Habibiyya Sufic order of Morocco, as well as co-translator of several other works by Ibn 'Ajiba as well as The Letters of a Spiritual Master by Mulay Al-Arabi al-Darqawi. Ahmad ibn ‘Ajiba was an 18th-century Moroccan saint in the Darqawa Sufi Islamic lineage. He was the author of numerous works, including The Autobiography of a Moroccan Sufi. Originally from California, Abdurrahman Fitzgerald and his wife migrated to Morocco in the late 1970s. Since that time, Abdurrahman has been involved in education and the study of Arabic, Islam, and Sufism for the past thirty years. He is also the translator and co-translator of over ten works of Sufism. Abdurrahman holds degrees from the University of California and Shenandoah University, Virginia, and is a co-founder of The Center for Language & Culture, Marrakesh.
“The unusual combination of a native Arabic speaker and an English speaker as translators seems to work well, and there are some excellent choices of words…Almost everything in (this work) is worth saying. It should be read and re-read." —Harfiyah Ball, on The Invocation of God, Journal of Qur’anic Studies

"Ibn Ajiba’s commentary on the Qur’an is an ideal one for demonstrating the subtle interplay between traditional exegesis and the rich reflections of Sufis. In this clear and eloquent translation, English readers will get a taste of how this kind of Sufi interpretation respects the apparent meanings of Qur’anic verses while suggesting deeper modes of understanding and additional layers of meaning. There is a long standing need for more English translations of significant Qur’anic commentaries. The extended excerpt translated from The Immense Ocean here is an invaluable contribution to this important task." —Kristin Zahra Sands, professor of Islamic studies at Sarah Lawrence College and author, Sufi Commentaries on the Qur'an in Classical Islam


​"Interest in Sufism continues to spread in the West, but the myth of a division between Sufism and Islam persists. Anyone who reads this translation will know that no such division exists . . . This work is a model translation that should be studied by all students of Islam." —Joseph Lumbard, professor and chair, Islamic and Middle Eastern studies program, Brandeis University