Ten Tough Problems in Christian Thought and Belief: A Minister-Turned-Atheist Shows Why You Should Ditch the Faith (Paperback) 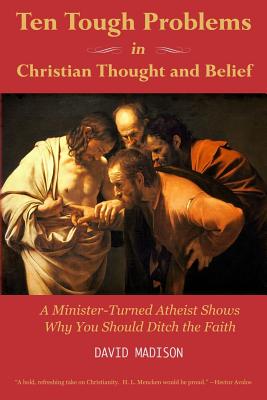 Ten Tough Problems in Christian Thought and Belief: A Minister-Turned-Atheist Shows Why You Should Ditch the Faith (Paperback)


Not On Our Shelves—Ships in 1-5 Days
(This book cannot be returned.)
An all-powerful God who permits unspeakable horrors and sent a Son who threatened more to come, forever, to those who don't believe in him. An inspired holy book that turns out to be full of archaic nonsense, moral failures, and contradictions. A world of disagreement not just between Christians and other religions, but within Christianity itself. Blood sacrifice and a tale of the walking dead as the very foundation of faith. These are just a few aspects of Ten very Tough Problems that David Madison describes in this wonderfully deep yet humorous dismantling of his former faith. Combining rigorous scholarship with engaging personal reflections and refreshing wit, he offers understanding and even some laughs while walking with readers past the gravestones of Christian thought and belief.