The Vision of God (Hardcover) 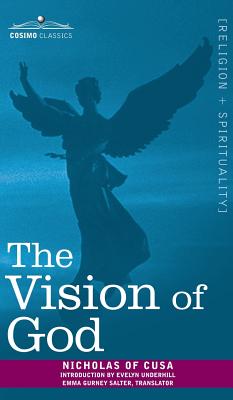 The Vision of God (Hardcover)


Not On Our Shelves—Ships in 1-5 Days
Known for his deeply mystical writings about Christianity, Nicholas of Cusa wrote this, his most popular work, against a backdrop of widespread Church corruption. God, he believed, is found in all things, and thus cannot be perceived by man's senses and intellect alone. The path to ultimate knowledge, then, begins in recognizing our own ignorance. Deeply influenced by Saint Augustine, Nicholas mixes the metaphysical with the personal to create a deeply felt work, first published in 1453, designed to restore faith in even the most jaded. A German cardinal of the Roman Catholic Church, NICHOLAS OF CUSA (1401-1464) was a philosopher, jurist, mathematician, and astronomer. Also referred to as Nicolaus Cusanus and Nicholas of Kues, he is considered one of the great geniuses and polymaths of the 15th century. Among his other works are Writings on Church and Reform, Catholic Concordance, and Of Learned Ignorance.