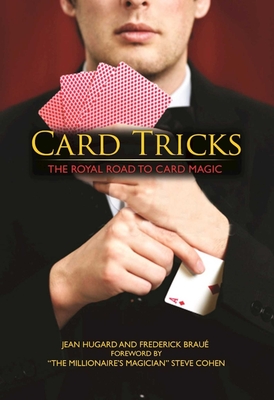 
Special Order—Subject to Availability
With more than 120 illustrations to accompany instructions to more than 100 tricks, and a new foreword by Steven Cohen, a master of sleight of hand, this edition of Jean Hugard’s classic is an essential edition to any illustionist’s library.

If you practice any sort of magic—or plan on giving it a try—you probably know that for most people, card tricks are often the starting point. If you have a deck of cards readily available, as many common households do, the only things required to wow an audience are a little sleight of hand and a magician’s secrets.

Published originally in the 1940s, this classic guide contains more than one hundred spectacular tricks allowing anyone to pick up a deck and dazzle an audience—whether their performance is in a theatre, at a party, or even on the street!
Jean Hugard, born in Australia in 1872, was an acclaimed magician during his time. Throughout his life, he performed magic around the world—mainly in venues in Australia, New Zealand, and even in the United States. After he retired from performing, he settled down in Brooklyn, New York, where he wrote more than thirty books on magic including Money Magic, Encyclopedia of Card Tricks, and Houdini’s Unmasking. He became blind toward the end of his life but in spite of his handicap continued practicing and writing about magic. He died on August 14, 1959.

Frederick Braué was an American journalist, a semiprofessional magician specializing in card magic, and a close friend of Jean Hugard’s, with whom he corresponded to write multiple books on magic. He passed away on July 3, 1962.

Steven Cohen is an esteemed contemporary magician and an expert at up-close magic. Often called “The Millionaire’s Magician,” he has performed for the likes of Woody Allen, David Rockefeller, Martha Stewart, Warren Buffett, Stephen Sondheim, the Queen of Morocco, and more. Additionally, he has been featured on The History Channel, David Letterman, CBS, and CNN, and in well-known publications including the New York Times and Forbes magazine, and is the author of the book Win the Crowd. He performs a long-running show regularly at the Waldorf Astoria hotel and currently resides in New York City.