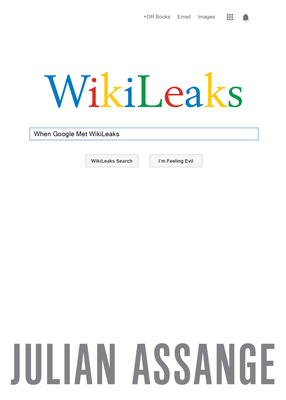 
Special Order—Subject to Availability
In June 2011, Julian Assange received an unusual visitor: the chairman of Google, Eric Schmidt, arrived from America at Ellingham Hall, the country residence in Norfolk, England where Assange was living under house arrest. For several hours the besieged leader of the world's most famous insurgent publishing organization and the billionaire head of the world's largest information empire locked horns. The two men debated the political problems faced by society, and the technological solutions engendered by the global network--from the Arab Spring to Bitcoin. They outlined radically opposing perspectives: for Assange, the liberating power of the Internet is based on its freedom and statelessness. For Schmidt, emancipation is at one with US foreign policy objectives and is driven by connecting non-Western countries to American companies and markets. These differences embodied a tug-of-war over the Internet's future that has only gathered force subsequently. When Google Met WikiLeaks presents the story of Assange and Schmidt's encounter. Both fascinating and alarming, it contains an edited transcript of their conversation and extensive, new material, written by Assange specifically for this book, providing the best available summary of his vision for the future of the Internet.
Julian Assange is the editor in chief of WikiLeaks and the author of Cypherpunks: Freedom and the Future of the Internet (OR Books, 2012). An original contributor to the cypherpunk mailing list, Assange is the author of numerous software projects in line with the cypherpunk philosophy, including the Rubberhose encryption system and the original code for WikiLeaks. An "ethical hacker" in his teens, and subsequently an activist and internet service provider to Australia during the 1990s, he is the co-author (with Sulette Dreyfus) of Underground, a history of the international hacker movement. Julian is currently a refugee under the protection of the government of Ecuador, and lives in the Ecuadorian embassy in London.