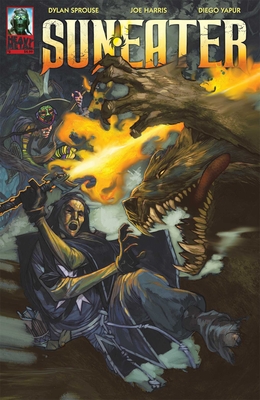 This is book number 2 in the Sun Eater series.

In a desperate quest to take his son back the warrior Kveldulf fully embraces his addiction to the monsrer wolf that's taken him body and soul.

In a desperate quest to take his son back from King Harald of Norway, the warrior Kveldulf fully embraces his addiction to the parasite wolf Garm, with terrifying results.
Dylan Sprouse is an actor and writer from Los Angeles, CA. After stepping away from acting to pursue higher education, Dylan Sprouse graduated from NYU in 2015 with a clear mission to further explore entertainment mediums as a whole. Now, having returned to Hollywood, Sprouse is exploring his entrepreneurial interests in full. This yet untitled project marks the first endeavor created and written by Sprouse to be released in comic book format. Between acting, writing, producing, and brewing mead, Sprouse is infusing his personal experiences and background into his artistry in an effort to follow his passions to their oft bizarre limits.

Born in the year 1981 in Belen (Catamarca), Argentina, Diego Yapur was already drawing before walking and talking. His need to transfer his incredible imagination to paper and his desire to learn endowed him with the necessary talent. He entered the professional world in the USA, working for Studio 407, Tokyopop, AfterShock (Lollipop Kids), Valiant (Life and Death of Toyo Harada and Bloodshot) and finally Heavy Metal (Sun Eater and The Rise). In Argentina he collaborated with Holograma, Rabdonmantes, UMC, etc.