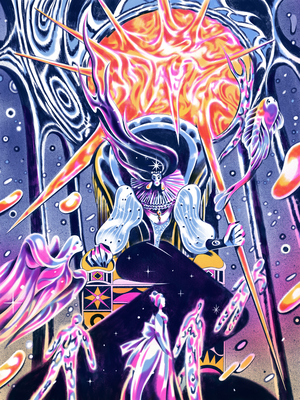 
Not On Our Shelves—Ships in 1-5 Days
The Blazing World is one of the most fascinating, unusual and astonishing pieces of literature in the English language. Written in 1666 by Margaret Cavendish, the Duchess of Newcastle, the story follows a young woman who is transported to a world of animal-people, becomes their empress, and eventually leads an invasion back into her own world, complete with bird-man bombardiers and submarine ships. The tale involves spirit possession, astral projection, the many-worlds theory, and an interdimensional otherworldly queer romance that is centuries ahead of its time. Featuring numerous full-page and spot illustrations, and housed in an elaborately die-cut and embossed slipcase, this is an heirloom edition designed to be a work of art in its own right. With an introduction by Brooke Bolander. 9x12, 138 pages.
Margaret Cavendish, the Duchess of Newcastle-upon-Tyne, (1623-1673) was an English writer, poet, philosopher, and playwright whose illustrious and genre-bending works include The Description of a New World, Called the Blazing World, Poems and Fancies, and Nature's Pictures drawn by Fancy's Pencil to the Life. She was the first woman to attend a meeting of the prestigious Royal Society, and debated and corresponded with some of the most prominent philosophers of her time, including Descartes and Hobbes. While left in undue obscurity for centuries, her works are now being rediscovered by scholars and readers alike as some of the most unique and brilliant visions of their time. Rebekka Dunlap is the brilliant cartoonist and illustrator behind 2016's Dream Tube, alongside many other comics, animations, and illustrations for clients like The New York Times, The New Republic, and The New Yorker. Her astonishing, often experimental work excels when bending worlds and minds, envisioning bold new possibilities in physical and psychological space, and her preoccupation with the interiors of the mind has lead her to visually discuss such topics as mental health, women's issues, and the emotional strain of navigating tumultuous systems of power. Leaning heavily on a lexicon of children's media and anime, Rebekka combines the whimsical with real world gravity.