Bullets and Bandages: The Aid Stations and Field Hospitals at Gettysburg (Hardcover) 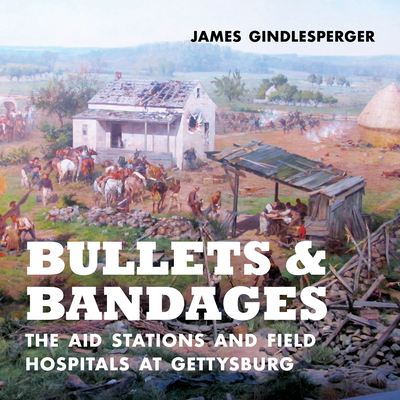 Bullets and Bandages: The Aid Stations and Field Hospitals at Gettysburg (Hardcover)


Not On Our Shelves—Ships in 1-5 Days
At Gettysburg, PA, during three days of July 1863, 160,000 men fought one of the most fierce and storied battles of the US Civil War. Nearly one in three of those men ended up a casualty of that battle, and when the two armies departed a few days later, 21,000 wounded remained. This book is the story of how those soldiers were cared for in a town of 2,500 people. Historian and author of several other guides to Gettysburg, James Gindlesperger provides a context for the medical and organizational constraints of the era and then provides details about the aid stations and field hospitals created in the aftermath of the battle. Filled with historical and contemporary photos, as well as stories about the soldiers and their healers, this book is a detailed guide for visitors to the site as well as others interested in American Civil War history.
James Gindlesperger is the author of several books about the Civil War: Escape from Libby Prison, Seed Corn of the Confederacy, and Fire on the Water. He and his wife also coauthored So You Think You Know Gettysburg? and So You Think You Know Antietam?, which were both honored as Foreword Reviews' Book of the Year finalists in the travel category. They live in Johnstown, PA.