States of Emergency: Keeping the Global Population in Check (Paperback) 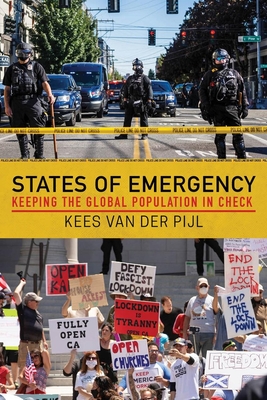 States of Emergency: Keeping the Global Population in Check (Paperback)


In Stock—Click for Locations
Ever since large parts of the world were placed in lockdown in March 2020 in the name of public health, there has been a growing public suspicion that some sort of global seizure of power and social transformation is being implemented under guise of the extraordinary suspension of democracy and unprecedented restrictions of basic freedoms occurring in so many countries at the same time.

This book contends that since the financial collapse of 2008, populations in many countries have become restive in the face of extreme inequality and diminishing life chances. In a digital economy, one to two billion people will soon be superfluous, but they are not likely to remain sitting on their hands; in many parts of the world their resistance has begun. The Western capitalist elites have lost the capacity to engage their respective peoples in an equitable social contract and have resorted to stoking fear -- from the terrorism scare and the Russian threat to the COVID infliction, with more variants coming on line -- as a formula for curtailing protest and maintaining power.

It analyses the social forces driving this process: the US national security state and its intelligence apparatus, the IT giants spun off from it, and the large media conglomerates that have joined forces to create a comprehensive surveillance system of Orwellian dimensions The production of disease threats is amplified by the Gates Foundation and other public international organizations including the WHO, along with the pharmaceutical industries, foresee unprecedented profit in plans to inoculate the world population with experimental gene therapies sold as vaccines. Ideas on using a pandemic to initiate a worldwide state of siege have matured until the need for collective intervention -- the threat of a new financial meltdown and the need to remove Trump -- prompted global elites to seize the day.

The virus threat may not be an idle one, given the Pentagon's biowarfare infrastructure which for decades has been producing gain-of-function viruses in laboratories the world over, as have a wide range of countries.

The book is the first to offer an extensively documented, comprehensive analysis of all aspects of this real and embellished threat that is already ushering in a global transformation. Yet it ends on a note of hope, arguing that the very IT revolution that enabled the siege holds out the promise of a deepening democracy as the global public surges past the gatekeepers, online and off.