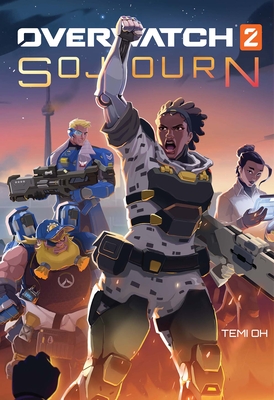 
Not On Our Shelves—Ships in 1-5 Days
Don't miss this exclusive origin story of Sojourn--the fierce, cybernetic soldier, commander of Overwatch in
days past and a steward of its future--based on the smash-hit video-game from
Blizzard Entertainment. In the early
days of the Omnic Crisis, there were few heroes to be found amid the
devastation, or even on the warfront that pushed humanity to the brink. But in
Toronto, a brilliant young captain named Vivian Chase refuses to cede her city
to the hungry monsters pouring out of the Detroit Omnium. Vivian has yet to
meet a lost cause she couldn't save, even one as dire as this.
To expel the omnics from her home and staunch the
flow of enemy forces into Canada, Vivian will need resources, and these days
only one organization has what it takes to stop the invasion: Overwatch. But
when the Overwatch Strike Team arrives, it isn't quite what she had in mind--an
American supersoldier at odds with his commander, a disgruntled Swedish
engineer, and a brilliant scientist whose dreams of a robotic revolution were
in part what caused the Crisis. In a race against time, Vivian will have to use
what she's been given to form an elite fighting force and a winning strategy
that can take the fight to the omnium . . . even if it costs them all their
lives. Sojourn's story puts the sheer
devastation of the Omnic Crisis--one of the most momentous events in Overwatch
history--into stark relief. Her tale is one of grit, heroism, and the fight to
build a better tomorrow, even if it's one she and her troops might not live to
see. A must-read for any Overwatch fan.
Temi Oh wrote her first novel while studying for a BSci in Neuroscience. Her degree provided great opportunities to write and learn about topics ranging from 'Philosophy of the Mind' to 'Space Physiology'. While at university, Temi founded a book-club called "Neuroscience-fiction", where she led discussions about science-fiction books which focus on the brain. After she received an MA in Creative Writing from the University of Edinburgh, her first novel, DO YOU DREAM OF TERRA-TWO?, was published by Simon & Schuster. It won the American Library Association's Alex Award in 2020 and was an NPR Best Book of the year in 2019. Her short stories have been published by Flametree Press and in Black Panther: Tales of Wakanda.