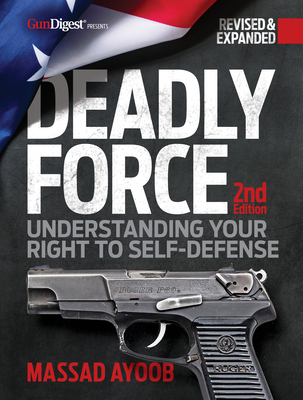 
Special Order—Subject to Availability
Be prepared. Understand the law. Carry with confidence.When it comes to explaining the details of self-defense law, Massad Ayoob has most likely educated more armed citizens than any other author. With his groundbreaking title, In the Gravest Extreme (1980) and following up with Deadly Force (2014), Ayoob has helped hundreds of thousands of law-abiding citizens understand the serious responsibility that comes with using a firearm to defend themselves and their families.Deadly Force, 2nd Edition is a continuation of Ayoob's mission to educate gun owners on all aspects of lethal force laws. Drawing on more than four decades of experience as an expert witness for the courts in weapons and shooting cases, and serving as a fully sworn and empowered, part time police officer for 43 years, Ayoob also educates through his Massad Ayoob Group classes such as the Armed Citizen's Rules of Engagement.There are legal, ethical and practical considerations that all gun owners need to be aware of, and Ayoob covers all of these angles in layman's terms.In this updated edition, Ayoob adds nearly 100 additional pages of new, no-nonsense commentary on headline-grabbing topics such as: A hallmark of the original Deadly Force is a deep dive into case studies of nationally recognized lethal force court cases. Ayoob has added two more high-profile case studies in this second edition to help armed citizens understand what really happens in court cases and how to recognize facts in contrast to the "news" you get from mainstream media.
Also new to this edition is a section providing updated, detailed information to help readers understand how to select the best attorney should they ever need one in the aftermath of a use-of-force event. Other thoroughly covered topics include:

Massad Ayoob owns and operates Massad Ayoob Group (massadayoobgroup.com), teaching thousands of students annually about practical shooting tactics and the many aspects of self-defense law. He has published thousands of articles in gun magazines, martial arts publications, and law enforcement journals, and authored more than a dozen books on firearms, self-defense, and related topics, including best sellers such as Deadly Force and Combat Shooting with Massad Ayoob.