The Tiger Tank and Allied Intelligence: The Tunisian Tigers (Hardcover) 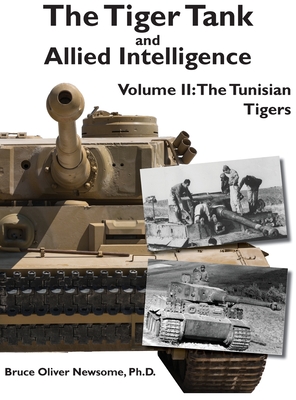 The Tiger Tank and Allied Intelligence: The Tunisian Tigers (Hardcover)

THE TIGER TANK was dramatically more powerful than any other tank when deployed in 1942. How did the Germans preserve its secrets? Why were the Allies taken by surprise? What did they discover?
After 20 years of research on three continents, across 25 battle maps, 31 tables of data, more than 500
photographs and drawings, and previously unidentified first-hand accounts, these volumes reveal what
Allied technicians discovered and what the propagandists covered up and distorted. Thus, we can learn more about the Tiger as it really was, rather than the hearsay that history books perpetuate.

THIS SECOND VOLUME tells the story of Tigers on the Western front from February to April 1943: the Tigers leading the greatest Axis counter-offensive of the Tunisian campaign, through Faid, Sidi Bou Zid, and Sbeitla, on the way to American abandonment of Kasserine Pass; the counter-offensive against the British from Sidi Nsir to Hunts Gap; the "Tiger graveyard," where seven Tigers were demolished; the American claims to knock out Tigers at El Guettar Pass, where Tigers never fought; how Tigers saved Maknassy Pass, but went unobserved by the Americans; the American claim to knock out a Tiger in between these passes, and the match with Tiger 213; the reasons why Tiger 213 was never reported higher than company echelon; the daring German spoiling attack near Medjez; the failed British counter-attacks against a Tiger at Djebel Djaffa; the strange abandonment of this Tiger without demolition; the British failure to exploit this Tiger; and American acquisition of Tiger 712, its restoration, enshipment to America, and subsequent neglect; the huge British and French offensive across Goubellat Plain, and how Tigers contributed to its defeat; and Tiger 731's final battles, its demise, its capture without demolition, and the reasons why its capture went unrecorded.