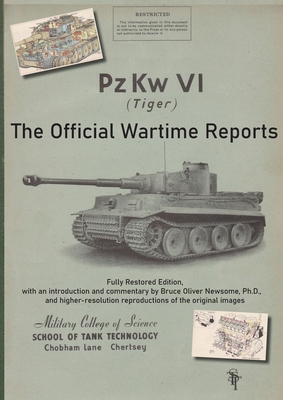 ALL TWELVE OFFICIAL WARTIME REPORTS ON TIGER 131 are brought together in a single volume for the first time, complete and fully restored, after careful selection from surviving copies, and overlaid with higher-resolution images than were available for the original printing.

These reports are illustrated with 65 photographs and 60 technical plans and sections, including 4 three-dimensional colour paintings. The pages are reproduced at the same size and format as in wartime, except to be cleaned of any amendments and annotations added after printing. The illustrations have been replaced with new copies of the rediscovered originals, except where the unique style of the original presentation is preferred.

Bruce Oliver Newsome, Ph.D., provides a new introduction, describing how the Tiger tank came about, how Tiger 131 was employed, how it was captured, what happened to it after capture, and how these reports were compiled. Within the reports, Dr. Newsome provides explanatory notes where, for instance, images were printed without caption or technologies appear without introduction.

These reports reveal what the Allies knew, as they discovered it. The reports also reveal the facts to counter the propaganda and myths that have accumulated in subsequent history books.

PUT YOURSELF IN THE SHOES of the first investigators of Tiger 131, the first of its type recovered to Britain, the tank that would become the most studied and photographed tank anywhere, and the only
running Tiger in the world today.