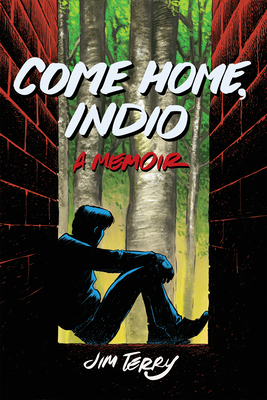 
Not On Our Shelves—Ships in 1-5 Days
"a tour de force of comics" (Ed Park, The New York Times)

One of the Top Ten Graphic Novels of 2020, as chosen by the American Library Association

One of the Best Books of 2020, as chosen by Publishers Weekly "Fortunately for readers of this raw and intimate graphic memoir, Terry never fully lets go of his youthful vulnerability. . . . Reckoning with sobriety requires connection and humility, as Terry makes the case for with sincerity and beauty, as he ties his recovery to his spiritual homecoming." --Starred Review, Publishers Weekly A brutally honest but charming look at the pain of childhood and the alienation and anxiety of early adulthood. In his memoir, we are invited to walk through the life of the author, Jim Terry, as he struggles to find security and comfort in an often hostile environment. Between the Ho-Chunk community of his Native American family in Wisconsin and his schoolmates in the Chicago suburbs, he tries in vain to fit in and eventually turns to alcohol to provide an escape from increasing loneliness and alienation. Terry also shares with the reader in exquisite detail the process by which he finds hope and gets sober, as well as the powerful experience of finding something to believe in and to belong to at the Dakota Access Pipeline resistance at Standing Rock.
Jim Terry was born in Southern California and grew up in the suburbs of Chicago. His mother was a Native American from the Ho-Chunk nation of Wisconsin, and his father was an Irish American jazz musician from Chicago. Jim is a prolific comic book artist who has worked on such comics as The Crow: Skinning the Wolves; Sundowners; Alice Cooper vs. Chaos; Vampirella and more. He travels the ComicCon circuit and has self-published several of his own comic books. Jim lives in Chicago with his four cats.