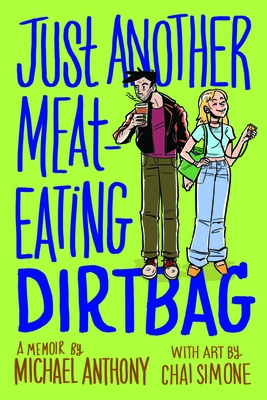 A rough-and-tumble Iraq War veteran is young and in love, and the last thing on his mind is food and the ethics of eating meat. But when his girlfriend becomes a vegetarian and animal rights activist, suddenly food is all he thinks about.

A true story of how love and vegetarianism can triumph over all else. Love, heartache, and the rest of the ingredients that make a reader laugh, smile, stop-and-think, are all found in this enthralling graphic memoir. Amidst the stories of love and frustration, there are treatises on food, vegetarianism, and the ethics of the animal rights movement (some of it juxtaposed against Michael's graphic wartime experiences). Told with Michael's sardonic perspective and the delightful artwork of debut graphic novelist Chai Simone, this is a journey of true love gone temporarily astray.

Michael Anthony is the author of the memoirs Mass Casualties: A Young Medic's True Story of Death, Deception, and Dishonor in Iraq and Civilianized: A Young Veteran's Memoir. Michael has previously written for the Washington Post blog, Business Insider, Signature-Reads, the Flaming Vegan, the Vegan Villager, and he has previously performed stand-up comedy under the pseudonym "The Vegan Comedian." Michael holds an MFA in creative writing from Lesley University. A former US army soldier, he currently lives with his wife in Massachusetts and spends his free time volunteering with veterans. Chai Simone is an artist and movie fan who grew up in Las Vegas. Chai went to the Las Vegas Academy of Arts where she double majored in film and art and studied at the University of Nevada, Las Vegas. Chai currently works as a freelance illustrator. This is her debut graphic novel.