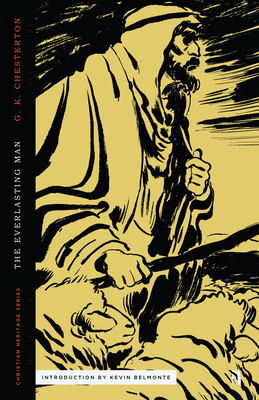 "In 1920, H.G. Wells wrote a two-volume work which became a best-seller, The Outline of History . . . Why not engage the same subject matter Wells had taken up, but from a perspective fully appreciative of the unique place Christianity held in human history? The result is The Everlasting Man." From Kevin Belmonte's Introduction

In The Everlasting Man, a humorous defense of Christianity which inspired C.S. Lewis, Chesterton shows that once man is reduced to animal, history becomes utterly meaningless.

What truly gives man his dignity is the fact that he is so different from the beasts. What makes Christianity so different is that it tells of the story of the true man, the final man, the everlasting man, who came down in history and transformed it.

"This sketch of the human story began in a cave; the cave which popular science associates with the cave-man and in which practical discovery has really found archaic drawings of animals. The second half of human history, which was like a new creation of the world, also begins in a cave . . . It was here that a homeless couple had crept underground with the cattle when the doors of the crowded caravanserai had been shut in their faces. And it was here beneath the very feet of the passers-by, in a cellar under the very floor of the world, that Jesus Christ was born." From The Everlasting Man