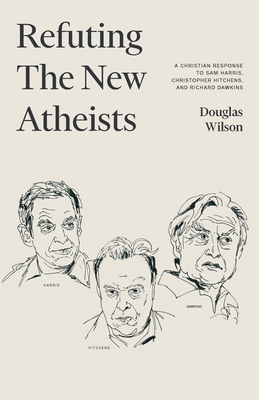 The so-called New Atheists have a great deal of moral indignation at all the evil in the world, but, as apologist and theologian Douglas Wilson cheerfully points out, they have no moral basis for it whatsoever.

If we are merely the result of billions of years of matter in motion, then why do we feel that concentration camps, genocide, apartheid, and the like are so obviously wicked and despicable, if in fact such events are just time and chance acting on matter? Harris, Hitchens, and Dawkins have made careers out of cataloguing the ways "religion" has messed up the world, from Old Testament genocide to the Spanish Inquisition to the Salem witch trials to Muslim extremism and beyond. However, Douglas Wilson shows that atheists stand on millennia of Christian culture and morality when they emphasize the problem of evil, and that atheistic materialism cannot give any account of truth, beauty, or goodness.

A Christianity Today award-winning author and renowned debater, Wilson has many spicy and entertaining refutations to the specific claims of Harris, Hitchens, and Dawkins, but at the center of it all is the Gospel. The real foundation for morality is the fact that God has made us in His image and made us so that our consciences bear witness to His laws, even when we break them. As Wilson shows, man's only hope is the good news that Jesus has taken on the deserved penalty for all the evils of the world in His death on the cross.

This book contains all three of Douglas Wilson's book-length responses to the New Atheists, published for the first time in one volume. It includes Letter from a Christian Citizen, written to Sam Harris; God Is, in reply to Christopher Hitchens; and The Deluded Atheist, a response to Richard Dawkins.

Douglas Wilson is a pastor in Moscow, Idaho, a father of three, and grandfather of seventeen. He is the author of numerous books, including The Serrated Edge, Against the Church, and How to Exasperate Your Wife. He peacefully blogs at dougwils.com.