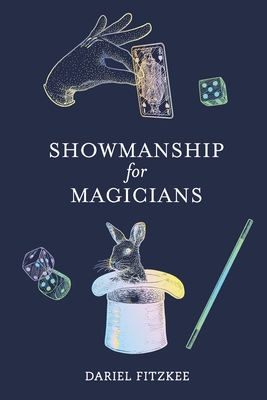 Showmanship for Magicians is a 1943 work by semi-professional magician and author Dariel Fitzkee. It is the first in the Fitzkee Trilogy, a classic collection that is still read widely by magicians, conjurors and illusionists alike.

There is little information available on the life of Dariel Fitzkee outside of his written work. Born in Annawan, Illinois, in 1898 as Dariel Comp Fitzkee, he later changed his surname to Fitzroy during World War II. But he continued to write under the name Fitzkee throughout his life.

Fitzkee was also a regular contributor to Genii Magazine, which is still published today. He wrote two recurring magic columns in the 1930s called "Thoughts are Things" and "Glimpses of Strange Shadows." Fitzkee also contributed a book and magazine review column called "Paper and Ink" that ran for over 12 years.

For all of his analysis and study on the subject, it seems that success as a professional magician eluded him. Fitzkee is said to have had an unsuccessful touring act from 1939 to 1940, after which he stopped performing.

But his most enduring written works were yet to come in the form of the Fitzkee Trilogy, starting with Showmanship for Magicians. Many magicians throughout the second half of the 20th century have considered it to be a cornerstone work in the field, including the actor Steve Martin who was fanatical about magic as a young man. He described the book as "...more important to me than The Catcher in the Rye."

Fitzkee was frustrated with the quality of magic at the time of his writing. He felt that the mediocrity that dominated the stages did damage to the reputation of the entire field of magic.

One of his biggest issues with magic in the 1940s was that its performers were still treating the trappings of the late 1800s as the "standard" for magic. Performers often dressed in out-of-date tuxedos, wearing top hats or turbans. They adorned the stage with old-fashioned round "Magician's tables" that had been popularized some 70 years before. Fitzkee felt that magic should be "...geared and attuned to the times" to keep it fresh and interesting for the audience.

Fitzkee analyzes the components of other successful forms of entertainment, like film, sporting events, theater, opera, and more. He breaks these down into a list of 39 "Audience Appeals" - music, color, comedy, conflict, etc - that can then be incorporated into a magic performance.

The second book in the Fitzkee Trilogy is The Trick Brain published in 1944. This work condenses all magic tricks into 19 basic effects, such as getting a solid item to penetrate another without damaging either. It also examines how to combine effects into new and updated tricks. The final book of the trilogy, Magic by Misdirection (1945), concerns the psychology of deception, or "the attack the magician makes upon the spectator's mind."

The books were written in this order on purpose. Fitzkee felt that entertainment was the primary purpose of a magician. Whatever else an audience may expect, the first thing they expect is to be entertained. Then he gets into the mechanics of magic in The Trick Brain, helping the entertainer to hone his or her skill and create original tricks. And finally, in Magic by Misdirection, Fitzkee examines the mental aspects of magic, from both the magician and the spectator's point of view.