The Zodiac and the Salts of Salvation: Parts One and Two (Hardcover) 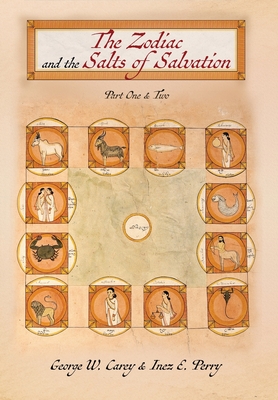 The Zodiac and the Salts of Salvation: Parts One and Two (Hardcover)

The Zodiac and the Salts of Salvation is a two-part work by frequent collaborators Dr. George Washington Carey (1845-1924) and Inez Eudora Perry (1871-1961). This book explores the use of certain minerals called "cell-salts" to cure disease and how one's Zodiac sign impacts their cell-salt deficiencies.

Dr. Carey was a homeopath whose theories of biochemistry had their foundation in the work of Dr. Wilhelm Heinrich Schubler. Dr. Schubler and his predecessors had developed the concept of cell-salts - naturally occurring minerals - to supplement deficiencies in the human body, thus curing disease and ailments.

Carey agreed with this idea. He proposed that illness cannot be cured by removal of some poison, but can only be remedied by adding some necessary element, some food, to the human body to restore balance.

Dr. Carey's unique contribution to the field of biochemistry was to connect each of the twelve cell-salts with a particular sign of the Zodiac. In his pamphlet The Relation of Mineral Salts to the Body and to the Signs of the Zodiac, Carey describes the characteristics of each Zodiac sign, their Biblical connection through a corresponding son of Jacob and disciple of Christ, and the cell salt in which they are often deficient.

Those born under the sign of Aries, for example, "are natural doubters until they figure a thing out for themselves." The associated cell-salt is potassium phosphate, "the greatest healing agent known to man, because it is the chemical base of material expression and understanding."

While Dr. Carey's work on mineral salts and the Zodiac is foundational, it is also largely theoretical. After Dr. Carey's death in 1924, collaborator Inez Eudora Perry republished The Relation of Mineral Salts to the Body and to the Signs of the Zodiac, and supplemented it with an additional work of her own that expounded on Dr. Carey's ideas. The resulting work was published in 1932 as The Zodiac and the Salts of Salvation.

Perry's contribution is titled An Esoteric Analysis and Synthesis of the Zodiacal Signs and their Physiochemical Allocations. Part two is much longer than part one, with thorough explanations of both the symbolism and practical uses of each cell-salt.

She also explores more thoroughly the connection of the Zodiac to the body of man - comparing the macrocosm of the universe to the microcosm of the human body. Aries, the Ram, is associated with the human head. As the highest part of the body, the head is the place of ascension and elevation. It contains the brain, the organ that separates man from beast.

Carey and Perry work through the entire Zodiac, explaining the symbolism of each sign and relating it to the greater universe, different cultural traditions including Christianity and eastern philosophy, the human body, and the human mind. The combination of the two parts is of enormous value - Dr. Carey's Relation of Mineral Salts as an introduction, and Ms. Perry's Esoteric Analysis for a more thorough and comprehensible explanation.

This book is still popular among homeopathic circles, and the cell-salts, sometimes called tissue salts, are used frequently in alternative medicine.