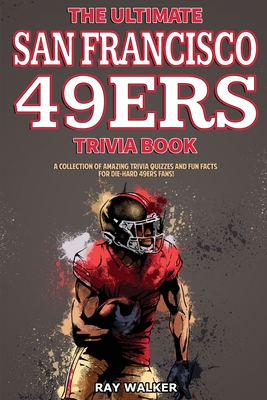 Do you think you're the ultimate San Francisco 49ers superfan?

Do you have a buddy who bleeds scarlet and gold for the 49ers?

Do you want to learn about the history of your favorite five-time Super Bowl champion?

Even if those don't apply to you, The Ultimate San Francisco 49ers Trivia Book is the best book to learn about the San Francisco 49ers and their history. This trivia book is packed with interesting facts about the 49ers from cover to cover, taking you from the playing fields of the Bay Area to the Pro Football Hall of Fame in Canton, Ohio.

In this book, you'll discover the answer to:

- Which team originally owned the draft pick the 49ers used to draft Jerry Rice in 1985?

- How many Heisman-winning quarterbacks have started a game for San Francisco?

- Who scored the 49ers' first touchdown in a Super Bowl?

- Who was the first draft pick of San Francisco's NFL era?

- Do the 49ers own the NFL record for the largest regular-season comeback?

Whether you are a 49ers fanatic hungry for more information about the team, an NFL superfan craving knowledge about the teams in the league, or just someone who enjoys learning new, interesting facts to learn new things, this book is right up your alley.

You will not be disappointed in discovering the world of the San Francisco 49ers, so just crack open the book, sit back, relax, and enjoy the wave of knowledge.