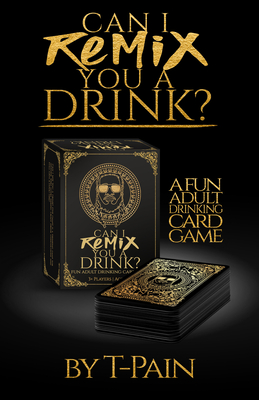 
Coming Soon—Pre-Order Now
Can I Remix You A Drink? (The Game) is a drinking game for anyone who enjoys mixing cocktail concoctions while having a good time, compliments of mega-superstar T-Pain.

Each player is given seven cards to start, with the objective of ending with no cards. However, checkered throughout the 87-card deck are a series of directives that will have you blending together various parts of a drink—from the base to the modifier, aptly named with musical themes as a nod to T-Pain's extensive musical catalogue. Each player has to mix, remix, and drink until their cards are gone. T-Pain first mastered the art of mixology with the release of his book Can I Mix You A Drink? This is the Remix.
T-Pain is a Grammy Award winning multi-Platinum recording artist, actor, and entrepreneur. Born Faheem Rasheed Najm, T-Pain has sold over 50 million records, won six Grammy Awards, and released seven albums. In 2019, T-Pain became the first winner of The Masked Singer, as the Tallahassee, Florida native aimed to show the world he was much more than the perfecter of Auto-Tune. T-Pain is also a brand ambassador, cartoon voiceover talent, podcast host, and the "dean" of Wiscansin University.
• "takes great care in offering a variety of upscale alcoholic beverages and their detailed methodologies within its jet-black pages."  SLATE

• "carries the whiff of memoir, using drinking as a lens for T-Pain to share his story and trace how his relationship with alcohol developed in parallel with his career." HIGH SNOBIETY

• "an exploration of new flavors to create delicious, unconventional recipes that can be used for parties, pre-games, or a quiet night in." BILLBOARD

• “funny, unpretentious takes on cocktails...Not only would I let T-Pain buy me a drank, but he can certainly mix me one too.”  NYLON

• “For any fan of T-Pain ....this is the perfect opportunity to get a sip of his world. The book combines new and classic recipes, so it works for novices and experts alike.” THRILLIST

• “blends music making and drink making in “Can I Mix You a Drink?” ... from the slick black pages.”  THE ATLANTA JOURNAL-CONSTITUTION

• “something different and, .... an opportunity for artistic synergy.”  GRUBSTREET

• “It's nearly impossible not to hear T-Pain's music as you read through the drinks and their unique combinations and names.” MIDWEST BOOK REVIEW

• “By the end, you'll have gained some insights into T-Pain.. he really just wants you to have a drink, be cool, and enjoy yourself.  URBAN DADDY